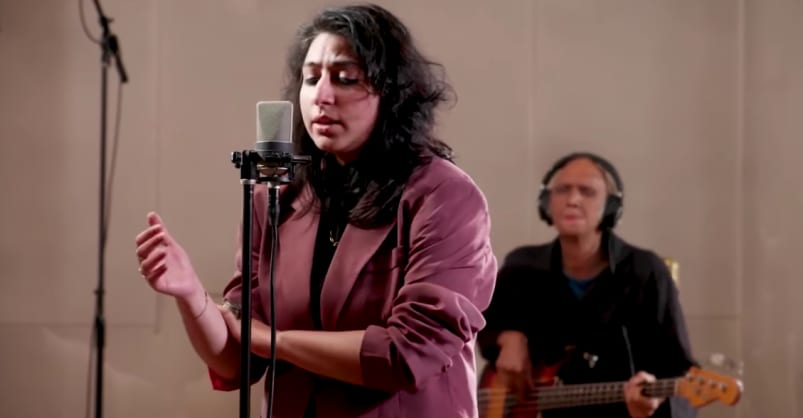 Arooj Aftab has shared an NPR Tiny Desk (Home) Concert. The performance features the final three songs of her April album, Vulture Prince, including the Grammy-nominated “Mohabbat” (Best Global Music Performance), which gained traction after Barack Obama included it in his 2021 summer playlist. The Brooklyn-based vocalist, musician, and composer, born and raised in Pakistan, is also nominated for a Best New Artist Grammy. The new footage comes with the news of her signing to Verve Records, announced today.

Aftab’s live band comprises Darian Donovan Thomas on violin, Shahzad Ismaily on bass and synth, Gyan Riley on guitar, and Maeve Gilchrist on harp, with Aftab singing up front. Their setlist starts with Vulture Prince‘s closer, “Suroor,” then moves into “Mohabbat” before finishing with “Saans Lo.” The video was shot in a spartan Brooklyn townhouse with paint-chipped walls — Aftab calls it a “disintegrating church” before correcting “church” to “convent.” A full glass of wine sits next to its bottle on an end table she refers to as her “metaphorical tiny desk.”