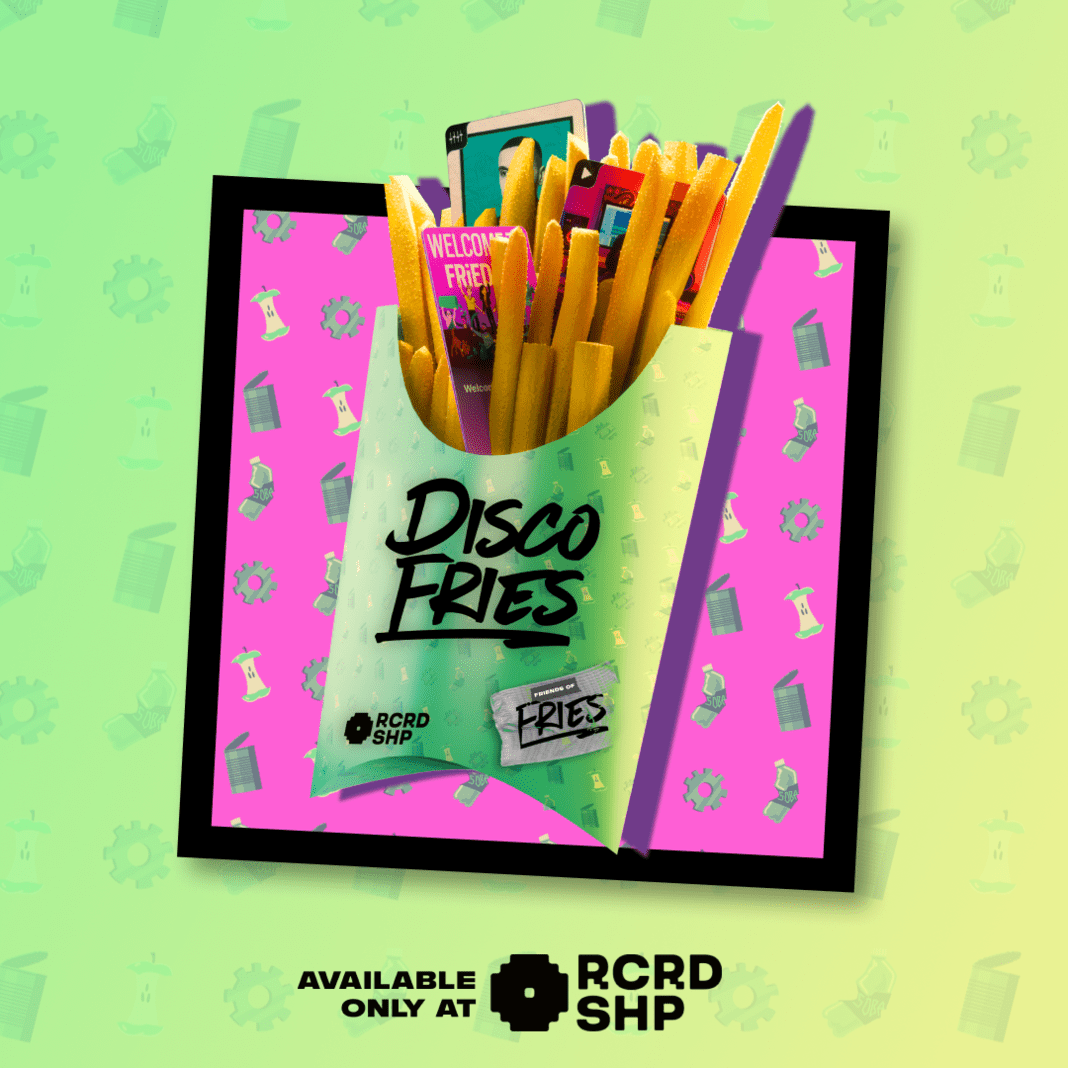 Leading electronic dance music duo Disco Fries are delivering an innovative new experience  and continuing to pave the way within music culture. Known in the dance music space for their signature sound and exceptionally clean mixes, Disco Fries are forging their path in Web3 with a new pack titled ‘Friends of Fries‘, featuring some of their own music, collaborators, and up- and-coming artists, out now on RCRDSHP. The pack features over 30 collectibles in total, with rewards and challenges for fans to have a chance at creating a track with Disco Fries, as well as a 1 of 1 fan experience, which includes a full studio day and dinner with the duo.

RCRDSHP has become known as the approachable way into NFT’s with their affordable pack drops similar to NBA Shot, ranging from $9-20, allowing fans to deep dive into tracks with many of the collectibles containing stems, behind the scenes videos, access to live events and depth you won’t find in your average Beatport purchase. Disco Fries have fully embraced this and did the first music NFT fan driven event known as ‘Participate to Create’ a few months back in collaboration with RCRDSHP, over 250 collectors, and recording artist Lena Leon. In addition to NFT drops, Disco Fries have created a successful platform known as Finish My Track. FinishMyTrack.com is where artists can take their music a step further to get it retail ready. If you need your drums replaced, or vocals on a record, Disco Fries are powering what is now known as the “world’s first finishing house”, a step beyond just mixing and a record. In addition to the website, the Disco Fries host a weekly live stream of the same name, bringing on A-list guests in the music and greater entertainment space to share their wisdom on what it takes to break through the noise and cultivate a successful career in the industry.

While they continue to pursue their passion as artists with a new EP slated for late 2022, singles alongside HARBER, Viiq, DOMENICO, and Lena Leon, they will be exploring ways to expand into new investments to help uplift underserved artists and improve the efficiency of the music industry.

American duo Disco Fries have become a staple in modern dance music by walking the sonic tightrope between mainstream and club-stream. From the dorm rooms at Berklee College of Music to the stage at EDC Las Vegas, Nick Ditri and Danny Boselovic have not only blurred genres with their signature blown-out basslines and classically driven melodies but have remained best friends throughout the journey. From the moment Nick and Danny looked at a plate of “Disco Fries”(otherwise known as french fries with cheese and gravy) and realized they had just discovered their artist name, their music has been championed by some of the biggest names in dance: from artists like Kaskade, Diplo, , and Hardwell to popular media outlets such as Billboard, MTV, Rolling Stone and Dancing Astronaut.

With over a million monthly listeners across streaming services, the Fries are always looking to push themselves even further. Their latest venture FinishMyTrack.com capitalizes on what the Disco Fries are most known for, finishing records. Helping both established and up and comers take their songs from 60% to retail ready, Disco Fries launched the world’s first “finishing house”, offering services from additional production to track assessment. In addition, they have teamed up with Sony Music Publishing for a joint publishing venture and invested in esports organizations such as FaZe Clan and X-Set and as a result have been featured on Forbes and Yahoo Business.