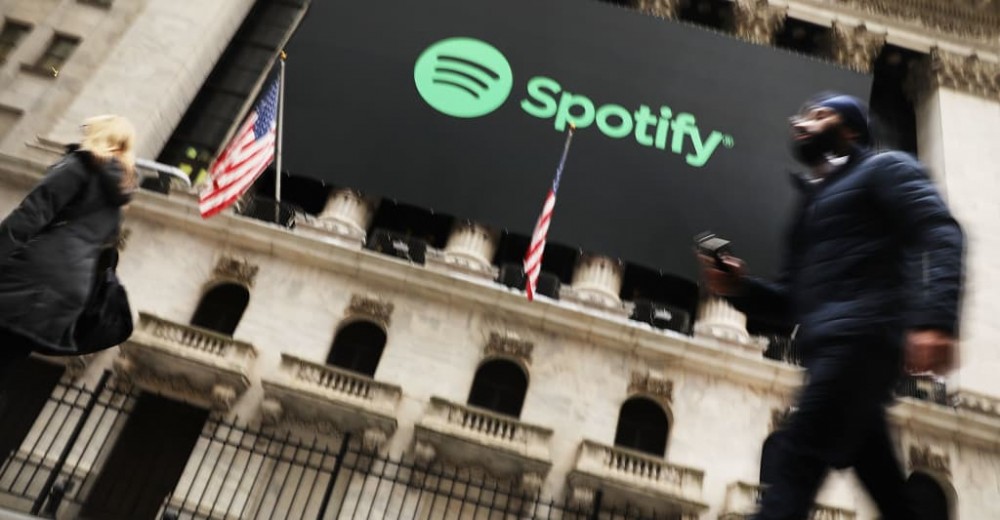 Last week, Spotify launched “Loud & Clear,” a website marketed by the streaming platform as an attempt to pull back the curtain on how it compensates artists. In its mission statement, “Loud & Clear” says it “aims to increase transparency by sharing new data on the global streaming economy and breaking down the royalty system, the players, and the process.”

The site’s launch comes as the controversy over streaming royalties continues to build. Artists like Gary Numan and Zoe Keating continue to speak out over low royalty payments from Spotify, and COVID-19’s ravaging of the music industry has only heightened this sense of urgency. “Loud & Clear” debuted months after the formation of the Union of Musicians and Allied Workers, a group created to advocate for human rights and dignity for workers in the music industry. “We believe that the only way to transform music,” UMAW wrote in its introductory post, “is to collectively take resources and power from the few wealthy companies that dictate our industry, and work toward a more equitable music infrastructure.” Since then, UMAW has taken their fight to Spotify’s doorstep with the Justice At Spotify campaign, an ongoing effort to raise awareness for their cause. In March, the Justice at Spotify campaign held global protest actions at Spotify offices around the world and delivered 28,000 signed petitions calling for change.

UMAW’s vision of a more equitable music industry is laid out in its list of demands. They include a penny per stream for rights holders, the adoption of a user-centric payment model, and increased transparency behind “closed door contracts.” “Loud & Clear” does not directly address UMAW, and the Union issued a statement to Pitchfork decrying how Spotify’s site “has failed to meet any of our demands.”

To learn more about UMAW and its position on Spotify, The FADER spoke with Damon Krukowski, former drummer of Galaxie 500 and an organizer with UMAW. Throughout our conversation, which includes responses to specific points on “Loud & Clear,” Krukowski gave a no-holds-barred reaction to Spotify’s website, and urged musicians to demand much more from the company.

The FADER: What were your overall thoughts on Loud & Clear when it was announced?

Damon Krukowski: So obviously, Spotify has heard [the UMAW’s demands]. Now the problem is that there’s nothing on the website that any of us can find that we haven’t heard before. It is essentially restating all their justifications to their investors for why they’re such a great company for the music industry, without responding to anything that artists are saying. It is a lot of reshuffling of the same figures that we’ve seen before that don’t add up to enough for artists. And that’s our basic message. We don’t need to be told how we’re not being paid or why we’re not being paid. We just need to be paid, you know?

But at the same time, it’s just so obvious how they just don’t care what we say. There isn’t one shred of a compromise position or offer. A lot of what they say on the website is the same justification they always make: The music industry was being threatened by piracy, and they’ve come along and rejuvenated [it with] billions that flow into the industry. Okay. But the question is, where are those billions going? It’s all being directed at a very small portion of the music industry at the very, very top of it. The three major labels [and the] major label artists who are at the top of the playlists are benefiting hand over fist.

According to the most recently released IFPI report, the global music market grew 7.4% in 2020, driven by streaming. Spotify points to figures like these as proof that streaming is saving the music industry from piracy.

I think it is akin to Facebook saying that they’ve saved journalism. It’s like, “Yeah, sure. There are more people reading journalistic articles on Facebook than there were subscribing to newspapers, at physical newspapers’ nadir.” But they haven’t saved journalism, they’re killing it. And Spotify’s the same thing. Yes, they have found a way to drain all the revenue that’s out there for music into one central place and make that grow through this new technology. But it’s at the sacrifice of this varied environment for the way that recorded music was shared before.

The pie chart that is so alarming is the one that the RIAA put out, where you see streaming at 83% of the recorded music revenue, and 17% left for everything else. Now, let’s think about everything else for a moment: Satellite radio, commercial radio, terrestrial radio, licensing for sync use, film, TV, commercials, performance rights organizations, BMI, ASCAP for public performance, physical media, downloads.

What’s wrong with this is it’s totally unhealthy. You can’t have a healthy marketplace when 83% of the revenue is in one place or one technology. And that’s the same thing with Facebook. It’s like, “Well, look, more people are reading these articles and trading them around.” It’s like, “Sure, but the environment is a monoculture of disinformation.” And that’s what we’re at risk of with this model.

Yeah, but this also has nothing to do with our demands. We are speaking as rights holders. When we say a penny a stream, we mean a penny a stream to rights holders. So how is it an answer to say, “We pay rights holders .0038 a stream?” Yeah, we know that already. That’s what we’re complaining about. Here’s the bottom line: Apple Music already pays double the rate that Spotify pays. Amazon pays triple. So we’re not pulling things out of the air that cannot happen, but clearly, Spotify is not prepared to sacrifice any of their profits to increase their payments to artists.

My old band, Galaxie 500, in 2020 had 8 1/2 million streams on Spotify. We received .0038 [per stream] for them. We’re our own label. There’s nobody taking a piece of that. Spotify can’t say, “Oh, it has something to do with our contract with our record company.” No. We are the record company. And that’s true for many, many independent artists.

And even if it’s not, how is it an answer to say, “Well, we paid your record company the same pittance that you’re complaining about?” Frankly, that’s an old music business trick, to talk down to artists, to throw figures around like we can’t understand them. And it doesn’t get to the heart of any of our complaints, which are well-researched and well-documented, and deserve real answers, not this kind of PR smoke-and-mirrors.

The real complaint that does exist in this conversation about the labels is about the three major labels that cut a deal with Spotify that created this entire system. Spotify couldn’t get into the US market without the cooperation of the three remaining major labels [so] they gave them ownership share in the company in exchange for the agreement that we’re all living with now, which is that the artist royalties are pitiful. But [the labels] didn’t care, they sold their own artists down the river because they got ownership.

One of the UMAW’s demands is for a user-centric model of royalty payment. On the Loud & Clear site, Spotify says “We are willing to make the switch to a user-centric model if that’s what artists, songwriters, and rights holders want to do. However, Spotify cannot make this decision on its own. It requires broad industry alignment to implement this change.” What’s your response to that?

They are partners with the labels. When they try and point fingers at the major labels, they’re pointing fingers across their own boardroom. So no one is stopping them and the majors from changing the deals that they’ve made. Also, nobody’s stopping them from revealing the deals they’ve made. The real transparency to me, as we’ve requested, have to do with opening up what those contracts entail. What are they really paying each other?

Now, all of that is somehow operating in this big, high powered money world that the stock exchange loves, that capital investors love. But artists are not benefiting. And that’s what we’re screaming about. And the reason we’re screaming is because they’re not listening and they’re not responding. We still have no conversation with them. No one from the company has contacted us.

On the day Loud & Clear was announced Spotify founder and CEO Daniel Ek said “fans ultimately decide who thrives” on the platform.

That angered a lot of people. That’s related to one of our main demands, which is for transparency. And when we say transparency, we mean about the terms and the money that’s being exchanged between the majors and with Spotify. But we also mean about how the algorithms are working and how the playlists are working.

The platform itself is directing you where it wants you to go and that’s the point of the playlists and that’s the point of the recommendation services and the algorithms that run those. There are human elements to those playlists and there are algorithmic ones. We do not know everything that goes into them, and we do not know the reality of how these decisions are made.

Spotify claims that it wants “More artists than ever to find success through streaming.” In your view, what would they have to do to accomplish that? Or do you think that they can under their current system?

I’d love it if they did it. Daniel Ek has said that his goal and the company’s goal is to have a million artists make their living off the platform. And then they come out with this defense that says that so far, 13,400 are making $50,000 or more. Now first of all, that’s a lot less than a million. The second problem is what is this $50,000 generated? They’re talking gross. Now first of all, most artists are on record labels. At best, you’re splitting that 50/50 with the label, so now you’re getting $25,000. Now the artist may be a solo artist who has no share with anybody else. But most likely not. I mean, music just doesn’t work that way. We have bands. We have groups. We have managers. We have a lot of people that it takes to make recorded music. Recorded music is actually a collective activity, so what do you get out of it? That’s what I can’t believe, is the gall that they put these figures out there that look like the figures we would put out. And they’re putting them out saying, “Look how great this is for the music industry.”

What it really all boils down to for me is that Spotify is not a music company. This is how it’s different than dealing with the world of the major labels, et cetera, which was always difficult for artists. But what has really changed is now we’re trying to deal with a tech company that actually doesn’t speak our language, doesn’t want to speak our language and doesn’t even have representatives who work with us.

And what it gets to, which is the deeper truth about our relationship to tech is that Spotify doesn’t need music and that’s really the problem. You can see them already moving away from music just like Amazon moved away from books. And really, I think it’s the same with Spotify and music. We are building their platform, and we are building their user base and they’re not compensating us fairly for that.

This interview has been edited and condensed for clarity.