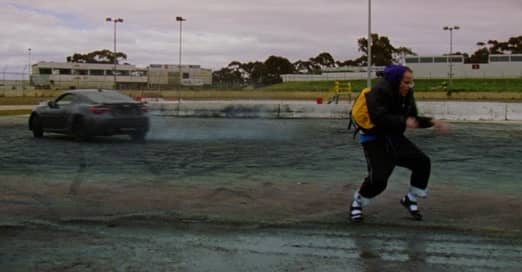 King Gizzard & The Lizard Wizard have shared a DJ Shadow re-write of “Black Hot Soup,” a song from their 18th studio LP in 10 years, June 2021’s Butterfly 3000. DJ Shadow’s take on the track — dubbed the “‘My Own Reality’ Re-Write” — is the third single and opening track of Butterfly 3001, a full remix album of the summer record, out January 21 via KGLW.

“We’ve put off doing a remix album for a long time,” King Gizzard’s Joey Walker said in a statement on the new project. “Maybe it was conscious, maybe it wasn’t. But it’s happening now. That’s not to say that Butterfly 3000 makes the most sense to remix. It might seem like the obvious one, but it’s not. Yes it’s electronic. But so is a fridge. Have you tried to dance to Butterfly? It’s hard. It ties your shoelaces together. It’s duplicitous in its simplicity. But Butterfly 3001 expands on this. It also deviates and obliterates.”

DJ Shadow’s take on “Black Hot Soup” — which follows the new record’s lead singles, “Neu Butterfly (Peaches Remix)” and “Shanghai (The Scientist Dub),” both released last month — is indeed an obliteration of King Gizzard’s characteristically free-wheeling, psych-rock version. Shadow’s “reality” of the track retains elements of the original, but it’s set in his own world of breakbeats and vinyl scratches.

The track comes with a video directed by frequent Gizz collaborator John Angus Stewart and starring Australian satirist, author, documentarian, and radio personality John Safran, who chews gum, vomits, and passes out in a parking garage before breaking into a disturbingly spastic dance routine.

“‘Black Hot Soup’ is an almost perfect way to describe the world as we know it in the present,” Stewart said, describing his vision for the video. “A bubbling, thick, sticky, confusing angry place that seems to be made for generations long past. Therefore I wanted to portray a character somehow revelling in the chaos, dancing on the ashes of society. There is an inherent freedom watching someone hitting bottom so hard with a smile. To me it’s a non-cynical representation of expression through music! As DJ Shadow fully reworked ‘Black Hot Soup’ I cast John Safran to fully re-work the song again within a performance. Calling it a dance is a stretch, I’d call it more of a full body dry heave.”