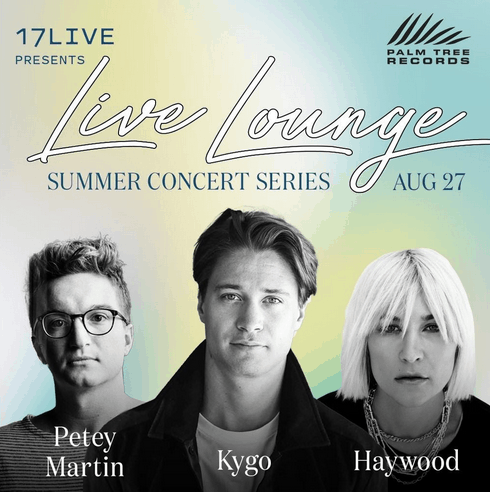 LIVIT, a worldwide live streaming and entertainment platform operated under the 17LIVE brand, announced today that it will host a live-streamed concert and interactive event series starring global superstar Kygo‘s Palm Tree Records, multi-platinum award-winning singer/songwriter VASSY, and more. The interactive Live Lounge events, presented by 17LIVE, will begin on August 6th. Each performance will be exclusively live-streamed on Asia’s #1 streaming platform, LIVIT, via the LIVIT Official Account in the app, which can be accessed HERE. With more than 45 million users, 17LIVE is the leading platform for emerging musicians, performers, and influencers in Asia, and its US-centric brand LIVIT is quickly developing in the United States.

VASSY and hit-making singer-songwriter Josh Cumbee will perform at the 17LIVE Live Lounge on August 6th. VASSY is widely recognized for her vocal talent in viral collaborations with dance music giants such as and . Josh Cumbee has worked as a producer and composer for artists such as Madonna, Kygo, Rita Ora, , and Adam Lambert, and Olivia Rodrigo.

The first-ever showcase for worldwide superstar Kygo’s Palm Tree Records, a joint venture with Sony Music Entertainment, will take place on August 27 at Live Lounge. Frank Walker, Forester, Haywood, and Petey Martin, all signed to Palm Tree Records, will play at Kygo’s showcase. Frank Walker, a Toronto-based DJ/Producer, has captivated fans all over the world with club-ready collaborations like “Like Gold” with Loud Luxury and Stephen Puth. Los Angeles-based indie electronic duo Forester has already left their mark on the scene, fusing acoustic instruments with electronic components to take the listener to vast open spaces, allowing for both introspection and the need to dance.

“I’m excited for my artists to have the opportunity to show the world what they’re capable of.” -Kygo

Songwriter and producer Haywood has produced hits for everyone from Katy Perry and Kygo to BLACKPINK and Selena Gomez, and is now a solo artist. Nashville-based Petey Martin wrote and produced Celine Dion‘s “Ashes” for the Deadpool 2 Motion Picture Soundtrack, as well as five songs on Kygo’s “Golden Hour” album, including the lead single “Like It Is.”

Head of U.S. Operations for 17LIVE, Armin Collosi, says, “We are thrilled to launch the Live Lounge concert series with some of the most respected music artists in the industry. Our platform is quickly becoming a special place for talent of all levels to showcase their creativity, and we are proud to provide the platform where they can be their most authentic selves. With the return of live music, LIVIT has created a unique concert experience that will allow fans to interact in new ways with their favorite artists. We look forward to seeing all the amazing performances we have scheduled this summer.”