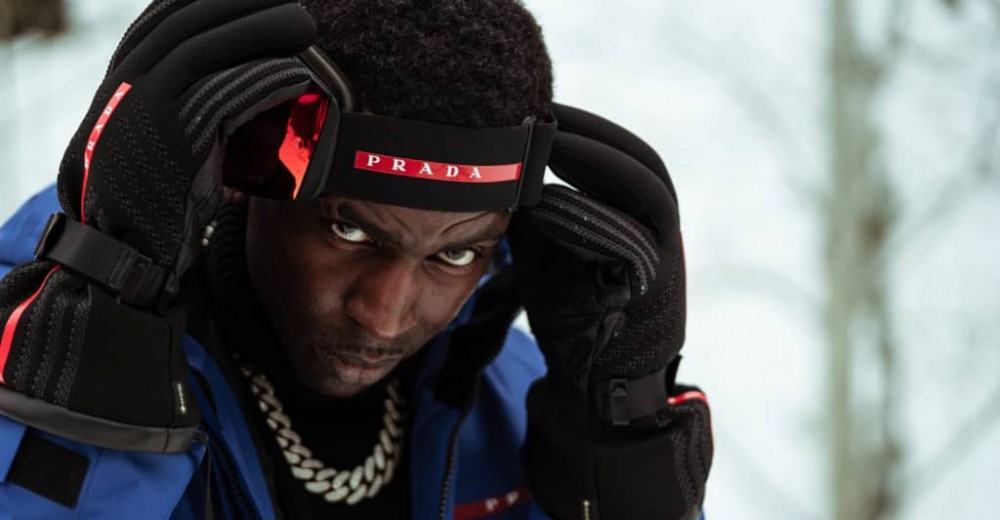 Young Dolph’s 2017 album Bulletproof has defiance that rap legends are made of. The album was recorded after an incident that same year when shooters sent dozens of gunshots into Dolph’s car. The rapper was uninjured, and on “100 Shots,” Dolph gleefully recalls the shooting, scoffing at his enemies and stunting with the casual audaciousness that became the hallmark of his artistry. Dolph raps about everything from the bullets that missed him to foreign vehicles in his garage, from sex in rush hour traffic to a warning that he sleeps with his finger on the trigger. After all that, Dolph takes a large breath and howls: “How the fuck you miss a whole hundred shots?’’

The album’s entire tracklist itself is a chopped-up sentence asserting his immortality and superiority. “In Charlotte,” the second track, includes an interlude in which a friend calls Dolph to ask if he is okay. Dolph is caustic, calling the assailant a “stupid ass nigga.” On the penultimate track “I’m Everything You Wanna Be,” Dolph recounts his rise like he’s delivering a sermon: “First I pray for it, then I hustle for it / Just livin’ life, wake up and roll the dice / Put everythin’ on the line, you gotta sacrifice / Used to playin’ in the dirt now we covered in ice.’’ Bulletproof is full of songs that push back at Dolph’s enemies, daring them to test him again.

From the moment he emerged from the Memphis scene he was compared to Gucci Mane and Project Pat. But while their flows had something in common, it never quite fit. Gucci is sneaky, less outgoing and gregarious. Pat had that dark underbelly in common with Dolph; there were pimp jokes that might have worked for 2 Chainz. But Dolph was proudly Memphis, with a drawn-out cadence that sounded more athletic. Truth is, Dolph never sounded like anyone but Dolph.

To see Young Dolph was to see the fabric of Memphis, that Southern drawl oozing over generations of musical history. He was an entrepreneur who started and ran his own label, Paper Route Empire. In a vulturous industry where artists often struggle for their freedom, Dolph was a vocal proponent of independence. Even when he talk up the notion of signing with a major, he was thinking about the impact it might have on the next generation, telling The Breakfast Club that his independent background could provide a roadmap. “They can look at me and be like, ‘Damn. We ain’t gotta be in a rush to sign a deal,’” he said. “‘We might get hot first, and we can just go crazy. Have our structure right, have our whole business and everything right and really get our money and be prepared for when it come. It’s different now. The whole game is different now. You gotta know how to take advantage of it.”

As a philanthropist, Dolph went above and beyond. Earlier in the week, on behalf of Paper Route EMPIRE, he launched a holiday campaign to give away food and clothes and food to disadvantaged families in the Memphis area. His family, led by his wife Mia Jaye, ran a community non-profit organization called the Ida Mae Family Foundation. They donate clothing to victims of domestic violence and run thanksgiving programs as well. He looked out for the people around him. “I don’t have no deadbeat dads around me,” he said in an interview. “How do you look hanging with me, when I got kids that I am taking care of and you in the backseat not taking care of your kids?” It’s not easy buying into legends anymore, with every hero’s faults pored over and put on display. But Dolph had it both ways. He was as human as it got, and he was a real Memphis legend.

He’d been raised by a strict grandmother, only seeing his parents, in the throes of crack addiction, once in a while. He described what he saw as a kid as a “living hell,” but he forced his way out of poverty and insisted he wanted to do the same for his parents after his grandmother passed away. A few months after dodging those bullets in Charlotte, he was shot three times after an altercation in Los Angeles and was left in critical condition. But he bounced back again. He stayed vital.

He was funny, too. On “Attic,” from the 2016 mixtape Bosses & Shooters, he says he has a “whole lotta shottas’’ with him, then he corrects himself with a meta ad-lib: “Nigga You Ain’t Jamaican!” His 2017 track “Play Wit Yo Bitch” still ranks as one of the funniest diss tracks ever made, with him calling Yo Gotti ‘’Ho Gotti,” labeling him a “big head muddafucka” with such spite that the song should come with a Surgeon General’s warning. He was also hilarious on social media, non-stop funny, without ever turning himself into a bit. There was the perfect “Wut da hell is shit I’m hearin’ bout Korea” tweet, a random and amusing moment. (Dolph wasn’t making light of the situation; I think he was genuinely concerned about the news. Like, what the hell was he hearing about Korea?) Just last month, he tweeted that he never knew what anxiety meant until his Doctor told him that he had it, but still made it a punchline: “He said I need some me time to myself. TF,” Dolph was living life like the rest of us, trying to crack jokes, filtering the news, dealing with anxiety. He just happened to be one of the best rappers alive. His charisma was often awe-inspiringly effortless, both on wax and in everyday life.

Dolph wasn’t only looking out for himself either. Key Glock, his cousin, has become a star in Memphis hip-hop and one of the very best rappers in the game. Their collaborative album, Dum and Dummer, is excellent, taking cues from UGK and Three 6 Mafia without ever coming off as some trite back-in-my-day throwback. It was definitive, not derivative. Their partnership was fluid. So many collaborations in the music industry feel forced and some clearly are — dreamed up by a label head who doesn’t know either artist, done to make large splashes that end up as messy stains all over the CD. This was authentic. Where Dolph had ad-libs and a cartoonish way of rapping, Glock was more serious, a young upstart as ruthless on the mic as his name suggests.

It’s easy to get lost here, to treat another senseless murder as a teachable moment, to point fingers, overthink things. The fact is that gun violence is state-sanctioned murder. America’s problem. Our Senators and Congresspeople still refuse to do anything about an epidemic that has killed 241 people in Memphis alone so far this year. This generation has seen — continues to see — death at its fingertips in high definition. We have to grieve publicly, to see people speculate about the details in real-time. And just as quickly we’re forced to see bad actors twist things to their own ends. That wasn’t the way Dolph — who tried through his charity to close the gap that systemic racism has wrenched open in Memphis, who confronted life with humor, and who looked out for those around him — lived his life. It’s not something we should give into either, however hard it might be to resist, over and over again. Young Dolph was a Memphis legend, an artistic and compassionate soul. And the realest advice he could give was to never stop.