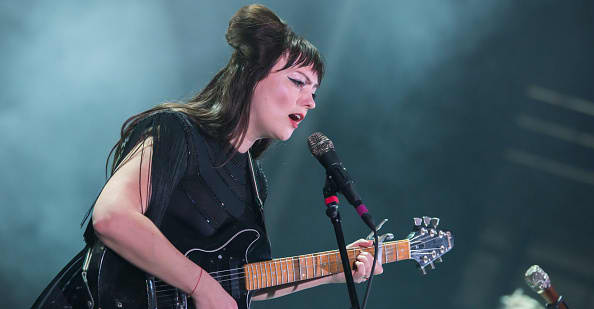 Angel Olsen shared a new, orchestral version of her song “Waving, Smiling” on Tuesday. The wistful new take features an 11-piece orchestra performing string arrangements by Jherek Bischoff, and turns the acoustic balladry of the original, which appeared on Olsen’s 2020 album Whole New Mess, and turning it into a sweeping, cinematic experience. The track is set to appear on the upcoming Far Memory LP from Olsen’s Song of the Lark and Other Far Memories box set collection.

“This song is all about chapters closing, and learning to let go of things I can’t understand,” Olsen said of the song in a press release. “It’s very me—I will always nosedive into love, and suffering can definitely come with that. When I hear this version the strings really bring the song to its necessary bittersweet boiling point.”

Olsen’s upcoming box set will include her last two albums, All Mirrors, Whole New Mess, as well as the bonus Far Memory LP and a 40-page photo book. Last month, Olsen shared “It’s Every Season (Whole New Mess)” from the boxset. Song Of The Lark And Other Far Memories drops on May 7 via Jagjaguwar.

Listen to “Alive and Dying (Waving, Smiling)” above.