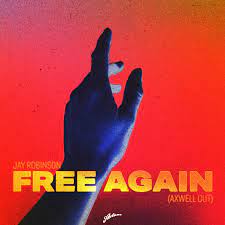 One of the all-time greats of house music is back. Yes. You read that right. is back. After a couple of months surrounded by the Swedish House Mafia hype, it was time for one of the most proliferous DJs to deliver a brand new jewel. This time, Axwell joins forces with one of my favorite names as of lately. Jay Robinson, English DJ & one of the new talents I’m the most excited about is responsible for this hardcore track. Now, Axwell has added his magical touch, and so ‘Free Again (Axwell Recut)’ was born.

Jay Robinson is one of the hot names in house music right now. The DJ specializes in the dark sounds of the genre, and we love it! However, is not only us. Apparently, some big names are riding the Jay Robinson train as well. Axwell, Swedish DJ/Producer, member of one of the most successful acts in the history of dance music and founder of a huge label (Axtone) has apparently been riding with us for a while now. And now, he’s decided to jump in and grab a piece of that action. With his new remix, Axwell puts the name Jay Robinson out for everyone to see. And well, he also takes the chance and delivers a huge banger.

Axwell cuts are one of, if not my favorite type of remix. The Swedish DJ takes a track and gives it a house vibe few can achieve. This is the pure essence of house music, according to Axwell. This time, the DJ focuses on a darker, almost ghetto sound. The simplicity of the melody, along with a nasty bassline and a beautiful set of drums turn this track into an instant banger. There’s no other way to put it. Axwell has done it once again.

If you’re wondering whether you’ve listened to this track before, the answer can be found on the Swedish House Mafia BBC Radio 1 Mix. We’ve been waiting for this one to come out for a while now, and finally, we’re ‘Free Again’.