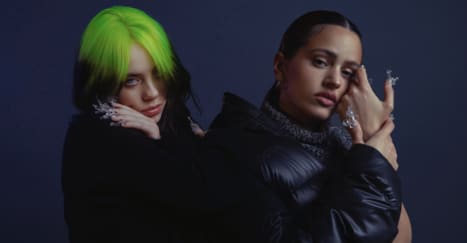 Billie Eilish and Rosalía have shared their anticipated, Spanish-language collaboration “Lo Vas A Olvidar.” The brooding ballad comes with a music video from Nabil, placing both performers in a shadowy and stormy void. It’s very intense, yet glamorous. Check it out above.

The song and video have been released in anticipation of a special episode of HBO’s Euphoria, “Part 2: Jules,” out on January 24. Fans got a preview of “Lo Vas A Olvidar” in a trailer shared earlier this week.

In other Billie Eilish news, her documentary Billie Eilish: The World’s A Little Blurry debuts on Apple TV+ this February 21. Watch a trailer here. She’s also got a self-titled photo book dropping on May 11, and was nominated for four awards at the 2021 Grammys.