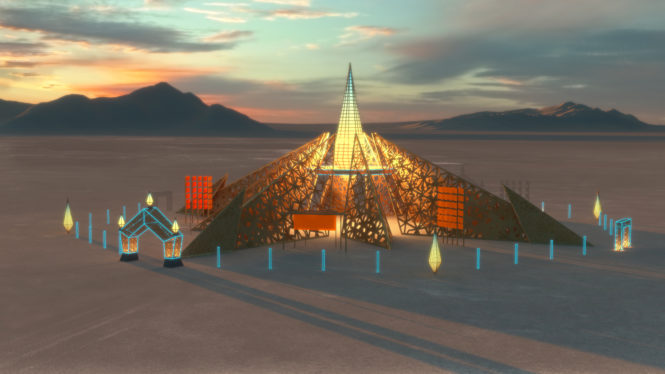 Following the recent announcement of ‘s 2020 theme, ‘,’ the festival has just revealed its new temple design: Empyrean. Each year, Burning Man’s temple design holds cosmological importance for Black Rock City and the festival culture. Designed by Laurence “Renzo” Verbeck and Sylvia Adrienne Lisse, The Empyrean Temple is a majestic temple that will sit at the heart of the Playa for 2020.

Last year, Burning Man’s temple opted for a more simplistic and linear design with ‘The Temple of Direction.’ This year, The Empyrean blends seamlessly into its new theme of The Multiverse. Standing at 70′ at its highest point and 200′ in diameter, Empyrean presents itself in the symbol of an eight-pointed star. Each spoke of the star forms a vast canopy leading to the middle, providing ample space to place offerings.

At the central gathering area, a large wooden sculpture resembling a flame hovers above. The flame rises from the center of the temple and is a beacon that can be seen from across Black Rock City, day or night. A warm, flickering light will illuminate the centerpiece to simulate fire.

Surrounding the templeis a plethora of flag poles are integrated into the design. Each flag can be written on and pulleyed to the top.

Befitting to the theme of The Multiverse, the Empyrean represents a region just beyond our physical realm. According to ancient cosmology, Empyrean symbolizes the highest celestial point. It is the highest center of wisdom and the source of energy-consciousness. Befittingly, the temple is also believed to be the birthplace of fire.

“To the community, Empyrean offers the healing properties of its central, eternal flame: reflection, resolution, release and renewal”

How to Get Involved

Each year, building the Black Rock City Temple monumental affair that requires volunteers. Renzo and Sylvia look to the community to give life to the temple. The temple build will take place primarily in Oakland. Interested volunteers can fill out the form here.

The Empyrean Temple also has a Kickstarter fundraiser active, for anyone interested in contributing.