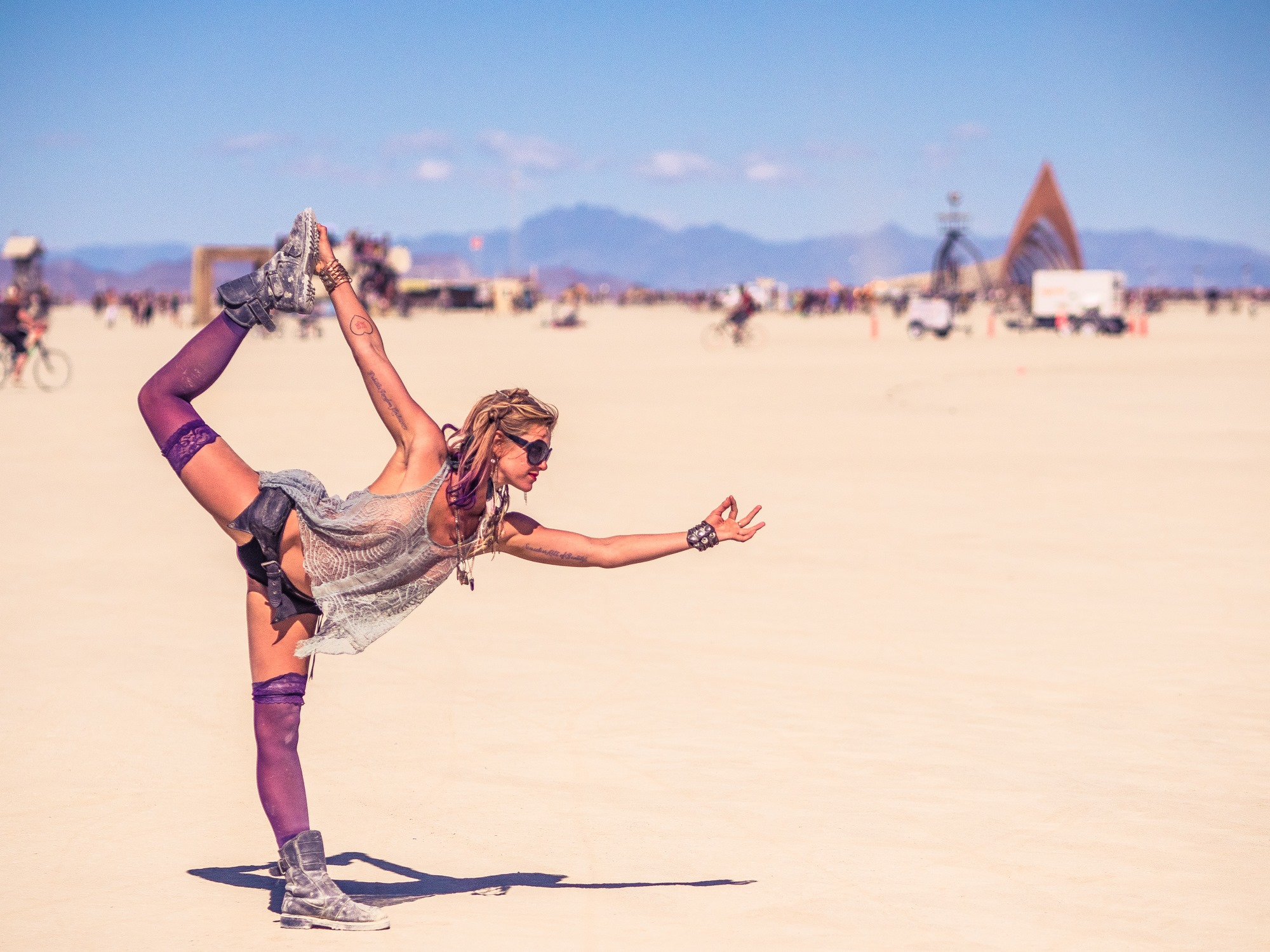 When a book’s sub-title reads “a mostly true story about love, light, fear, darkness, hallucinations, narcotics, spirituality, debauchery, and that thing in the desert”, you know you’re in for a good one. Kyra Bramble’s Burning Wings shares an adventure of one woman’s first Burning Man experience and the incredible epiphanies that attendees often uncover while attending the iconic event. Based on Kyra’s own experience (pictured in the photo above), it’s a mystical, truth-inspired fantasy that speaks to the ups and downs of navigating the desert, the intense spiritual moments that truly give life to Burning Man, and so much more.

A Dive Into The Dust

If you’ve been to Burning Man before, the first few pages of Burning Wings may resonate with you. For me, I felt like I was transported back into the first time I drove through gate, rolled through the dust, and set up my tent like I knew what I was doing (but definitely didn’t). I’ve always thought that there’s no real way to accurately describe a proper experience at Burning Man, but Burning Wing hits it right on the nail.

The debauchery, the unexpected interactions with friends and strangers, the laughter, the bikes that you’ve borrowed and try to ride, but are way too big (she and I had that experience in common) – it’s all there. The explorations of art pieces you stumble across in deep playa, the musical encounters, the costumes and beyond. But don’t be fooled; it’s not an all-positive, life-is-great-at-a-festival book. It goes much deeper than that.

Without spoiling this too explicitly, Burning Wings explores the often-familiar “hero’s journey” of sorts that so many Burning Man attendees traverse through. This event isn’t all roses and sunshine – it’s a challenging environment that pushes you to your limits in every way, and beyond them in ways you didn’t know they existed. The hallucinations of psychedelic trips, the moments of love, loss, pain – mentally, physically, emotionally, and the counteracting feelings of bliss and joy all flow through this book. It brings the vulnerability of one woman to the forefront as an example of the human experience, mixing a base of reality with a spice of fantasy. I can’t quite put into words how vivid of an image this book paints in the absolute best way.

A Word From The Women

Beyond this incredible story at its core, Burning Wings serves as a hold-nothing-back, first-hand take from an inspiring woman – in a culture that has more often than not upheld gender stereotypes that we, whether we’d like to admit it or not, are well aware of.

“There is a distinct lack of female voices (and music) in Burning Man, counter-culture writing, and EDM culture. Women are typically portrayed as sexual objects rather than as the visionaries, artists, and change-makers they are. Burning Wings gives a voice to the female experience, without vanity or apology.“

When speaking with Kyra as to how this book resonates with the EDM world, she shared:

EDM culture is more than big-name DJs, bright lights, giant speakers, and crowds of patrons dancing in unison (but Burning Man certainly has all of that)- EDM culture is just that, culture. Unlike a typical concert, in which the performer is apart from the community, EDM grew from the experimental and experiential underground, where an entire generation was given a safe place to connect and celebrate.

Doesn’t that sound… familiar? An experimental and experiential space? If that doesn’t describe the beautiful, dusty plains of the playa, I’m not sure what else does. As the years have gone by and the early moments of once-was electronic music culture are far behind us, Burning Man’s impenetrable world stands true as a space to express yourself and disappear from the real world in whatever aspect you want (and need).

She continues on to explain:

Although EDM is now stadiums and modern pop-culture on one end, at its core it is still a feeling, a sense of belonging, and a rebellion against the paradigm of mainstream culture. EDM culture born in dark urban warehouses and isolated forests, where communities came together to simply create and dance; has now inspired international transformational festivals, and overtaken places like Burning Man, once an anarchist experiment devoid of music.

Although many Burners will lament the changes that EDM has brought to the playa, and the media frenzy that has followed big names playing in a non-commerce and radical participation setting, Burning Man’s music magic to me will always be the unknown that you can’t replicate at large scale commercialized events. Burning Man’s music to me is chasing art cars across the dust during dark nights, hoping to catch a surprise Bassnectar set, finding Tipper at sunrise with a crowd of twenty people, or Diplo playing reggaeton to a handful of unknowing dancers.

Burning Man is so much more than EDM music, its EDM’s roots. It’s a creation of an experience by participants. t’s huge name DJs playing secret sets with no promotion just because they love the music. It’s the way that people rise to support one another, to challenge each other to dream bigger, to think bigger, and to act with more intention and less habit.

Burning Wings encompasses the intense awakening that can occur when a community rises together to create together, where there are no barriers, and everyone is free to be no one but themselves.

This is the space that we need in our lives – a space to stand true to ourselves, to experience the best and worst of our own beings, to explore, to understand, and to ask the questions we didn’t know we had. Burning Wings describes that ephemeral, week-long trip into the desert that serves as our annual dive into the inner corners and dark depths of ourselves – positive, negative, and beyond.

Well Worth The Read.

I could continue to elaborate on why I loved this book so much, but I leave it to you to explore beyond its cover. It’s well worth a read, and it’s damn entertaining, inspiring, and filled with reasons to make you want to walk out that door on a fresh adventure. I still remember the day Kyra brought me one of the first copies of Burning Wings on-playa years ago, and the energy that emanates from this woman shines through in each page of the book.

Burning Wings has ranked on Amazon’s new release best seller list and is up for grabs here – it’s free with Kindle Unlimited, and the paperback copy sits at $17.99. You can also explore more about the book here.