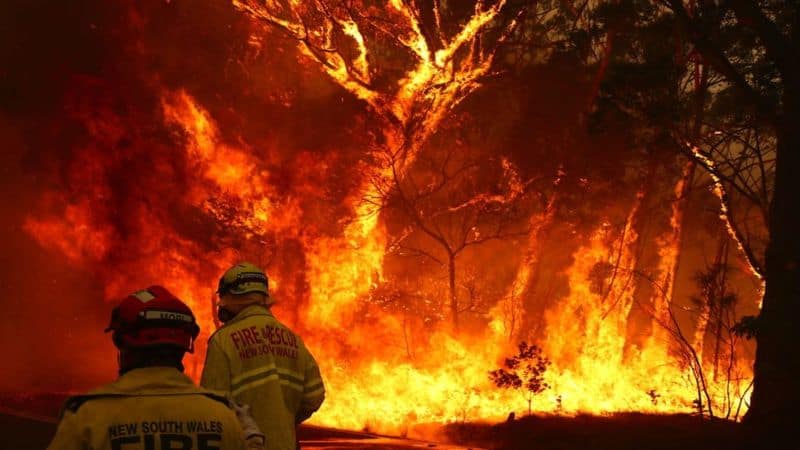 For months, Australia has been facing some of the worst Bush Fires ever seen. In the last week, the fires have intensified extremely; about 15 million acres of bush have been burned and destroyed. Thousands of firefighters and volunteers have been working for months to control this wildfire. Unfortunately, 24 people and half a billion animals have been killed so far due to the terrifying bushfires.

The Dance Music Community has been reacting and responding to this heartbreaking issue. Dance Music Artists such as , Fisher, , David Guetta, and Steve Aoki have attempted to raise awareness of the fires through social media and are urging their fans to donate to fire relief efforts. Some artists themselves have donated their profits to help fight the bushfires. You can view their responses down below.

If you want to get involved in stopping the bushfires, you can find out how you can help here.

ABSOLUTELY GUTTED TO SEE WHAT’S GOING ON IN AUSTRALIA RIGHT NOW… SENDING MY LOVE AND VIBES OVER TO MY FAMILY, FRIENDS AND THOSE HELPING ALL AROUND THE COUNTRY !!! ❤❤❤ ⠀ FIRST // I’M COMING HOME TO DO AN AUSSIE TOUR LATER THIS YEAR… TICKETS WILL BE GOING ON SALE EARLY, WITH A PERCENTAGE OF THE PROFITS BEING DONATED. ⠀ SECOND // IN AMONGST ALL THIS, IM GONNA THROW A SPECIAL PARTY, LOCATION TBC IN AUS & I’LL BE DONATING 100% OF THESE PROFITS TO THOSE IN NEED! ⠀ BUT IN THE MEANTIME // I’VE STARTED A @gofundme FUNDRAISER FOR THE @redcrossau. THESE GUYS NEED AS MUCH ASSISTANCE AS THEY CAN RIGHT NOW FROM US! ANY DONATION WOULD MEAN THE WORLD, EVERY CENT COUNTS… ⠀ LINK IN BIO WILL HAVE ALL THE DETAILS AS THEY DROP, SO WATCH THIS SPACE… LETS BAND TOGETHER AND RAISE SOME MONEY PEOPLE! ⠀ MUCH LOVE 🙏🙏❤ ⠀ – FISHER

I’m so proud and honoured to be an Australian. I come from one of the most beautiful countries in the world, but unfortunately my home state of NSW has now been declared a State of Emergency. Hundreds of bushfires have wreaked havoc down under where temperatures soar as high as 50 °C / 122 °F. Many have lost lives, tens of thousands have been evacuated from their homes and our wildlife has suffered unimaginable loss throughout the country. The fight against our burning landscape depends on thousands of brave and selfless volunteers giving their all to battle the blazes on the frontlines. If you would like to help, please donate to the NSW Rural Fire Service by visiting the link in my bio.

All my thoughts to Australia, what are we doing with our planet ?

It’s unbelievable to see what this planet is turning into. The climate crisis is no joke but we all seem to look the other way when it comes to making real changes. We need to change the way we live and eat to make sure we can save this planet so animals and people don’t have to suffer like this. Make a difference yourself because no one will do it for you! Please donate anything you can to help! Link in bio ❤🌎 🐍 🦘 🐨 🕷 🌱 🌲🇦🇺

So so so sad. It’s breaking my heart. My home is on fire. I’m donating $100,000 to @wireswildliferescue to help injured, displaced wildlife. Please watch my story to find out how you can help @australia

hello! The Where U Are Tour starts tonight in LA! It is bittersweet to be back on tour. Australia is on fire, people are dying and losing their homes and half a billion animals have died so far. I will be donating a portion of my fee tonight to the @nswrfs and hope you can donate too 🙏🏻 you can also donate to @redcrossau @cfavic @wireswildliferescue, anything helps ❤️

hello! The Where U Are Tour starts tonight in LA! It is bittersweet to be back on tour. Australia is on fire, people are dying and losing their homes and half a billion animals have died so far. I will be donating a portion of my fee tonight to the @nswrfs and hope you can donate too 🙏🏻 you can also donate to @redcrossau @cfavic @wireswildliferescue, anything helps ❤️

we have already raised over $10000 let’s gooo donation link in bio!

WOW ❤️ Thank you to everyone that showed up and showed out last night. we raised $44,500 through ticket sales, merch sales and donations. Our heart breaks for the victims so we have decided alongside the Espy that we are are going to round up that figure to $50,000. The donation will be split evenly amongst RFS-QLD, RFS-NSW, CFA-VIC & Red Cross Fire Appeal. Thank YOU again but mostly, thank you to the firefighters and volunteers who risk their lives to fight fires and save lives, Australia is so lucky to have you ❤️ Thank you everyone involved including (and not limited to): @hotelesplanadestkilda , @bensonaus @tonesandi , @gflip , @colourblindlighting , @jpjaudio, @swsmelb , @partywithmimi and all our amazing crew behind the scenes xx