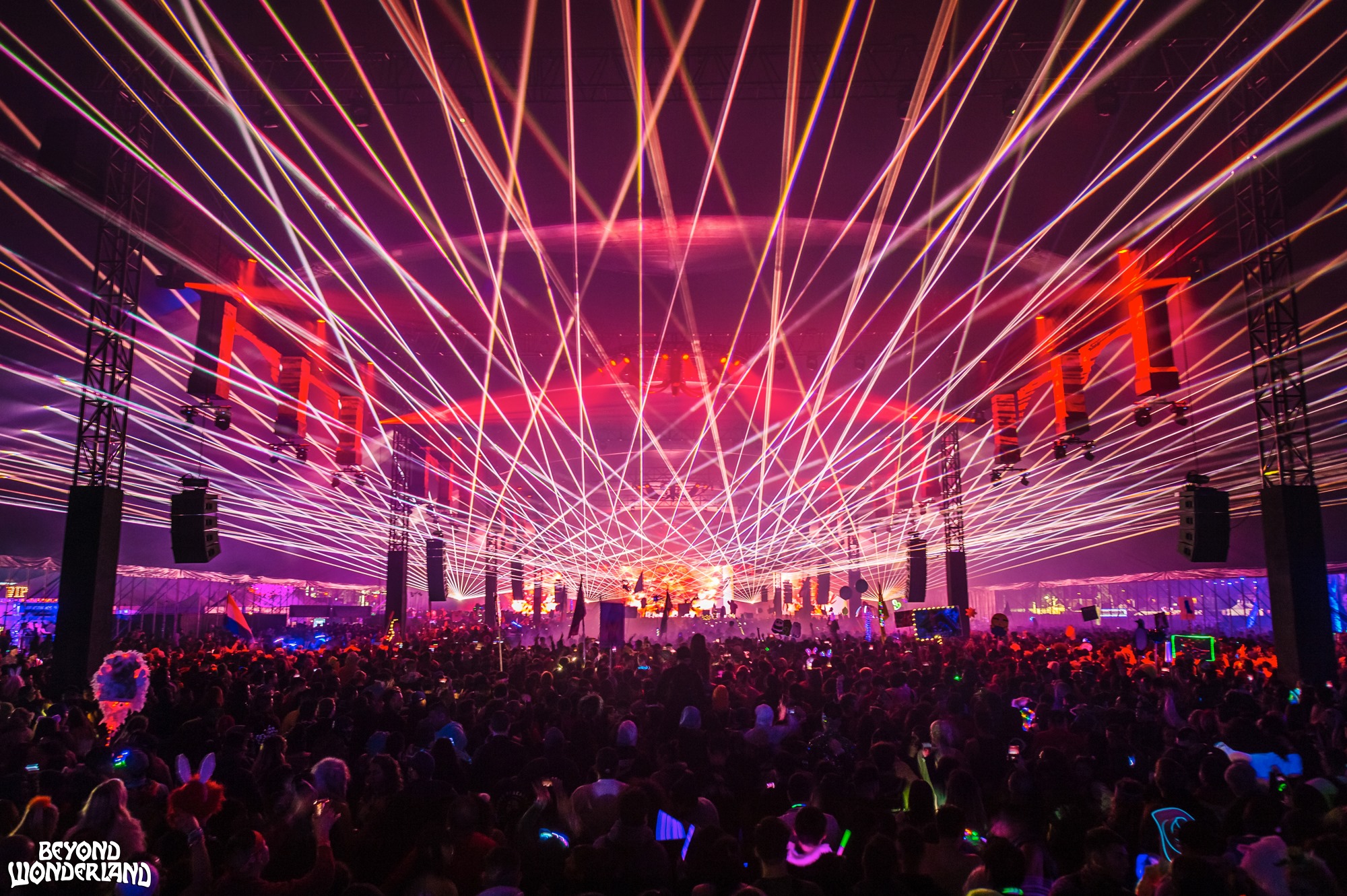 Beyond Wonderland 2021 made its successful return this year after COVID-19 canceled it last year. With the expansion of their venue and the newly added racetrack stage that finally got to make its debut, I’d say the weekend was a success. Temperatures reached over 100 degrees but Insomniac truly combatted that. They laid down astroturf on the asphalt of the NOS Events Center and the wayfinding was great. Art installations with wooden rabbits to teapots and a Chessboard Lane dawned the entire landscape. Four stages and an art car played the absolute best in music over the weekend.

Let’s Recap Now, Shall We?

Firstly, security check. It was a breeze, where everyone needed to show their IDs that matched their vaccination cards. Insomniac provided vaccinations on-site during the event for those that wanted it. After going through a few security checkpoints and search stops, the weekend began. As soon as you step in, Wonderland takes full effect with rides, performers, mazes, a Mad Bazaar, and a Rabbit Hole of music. Insomniac’s experience team did a great job with creating a world Beyond.

The first day of the event indulged crowds in all things Bassrush, Audiotistic, and Basscon, while Factory 93 claimed both days. But let’s start with the first artist. Jason Ross on the main stage? Yes, at the Queen’s Domain, he played all the signature classics along with several trance favorites during his trance/melodic dub set. He even threw in a little trap/bass to get the crowd hyped and a new ID track with Seven Lions yet to be named. Including songs from Slander, Gryffin, Illenium, and more through his remixes or collaborations, he ended it with Seven Lions and Dimibo’s remix of Darude’s ‘Sandstorm’.

Mad Hatter’s Castle on the racetrack hosted the best in house music with Jack Beats and Dr. Fresch. I briefly walked by Cheshire Woods to hear hardstyle coming from SAYMYNAME. I wanted to catch some of Delta Heavy B2B Dirtyphonics because drum and bass needs more praise! Though they played a bass-heavy set, their guidance showed the crowd the way. I split some time with Umek and Dillon Francis and made it to see Umek’s remix of The Thrillseeker’s iconic track ‘Synaesthesia’.

Then I booked it to Francis and knew he’d be great providing all the immaculate house vibes with his latest singles like ‘Reaching Out’ and ‘Go Off (Nuthin 2 It)’. The perfect way to end summer is with Dillon. Tiesto closed out the night with his infamous big room, big energy house sets that left fans cheering until the very end. Everyone there knew it was time to get down to business. You can check out his set here.

Christian Martin opened up the night while walking into the venue at Cheshire Woods. The tent never ceases to draw a crowd and it was great. Walking through Chessboard Lane and admiring the rest of the art installations, I caught Mercer at Queen’s Domain for a disco house set. With his music style transition, he’s rising in the ranks of future house artists for me. I then made my way to Mad Hatter’s Castle for Dreamstate.

Now, Genix smashed it out of the park for me. He played a tech-trance heavy set that elated my deep underground loving heart. He even played Maceo Plex’s remix of ‘Insomnia’ and it brought the vibe way up. There is so much room at the racetrack and a cool breeze to perfectly compliment it after the sun sets among the ember-lit sky. Following Genix was Craig Connelly who infused his melodic trance set with some elements of techno.

I’ve never seen k?d so I meandered my way to Caterpillar’s Garden for the most frenetic set I’ve ever attended since Virtual Self at the Shrine. I didn’t know what to expect but his set threw out cyber kinetic fast-paced tracks of all genres. Gammer followed him at the same stage and that was even more chaotic energy, in a good way. Gammer is also a first of mine. His UK/happy hardcore remixes of cult classic songs like ‘Say My Name’ and ‘All Star’ made the crowd go wild. So much high energy here, but a good intro to some hardcore/hardstyle house.

As Nitti Gritti and Party Favor played solo across the weekend, they also came together as Sidepiece. Their set took me by pleasant surprise with a tech-house marathon filled with hypnotic, mesmerizing soundscapes. Under the tent, the lights strobed and flashed, dancing along the sides. They played my favorite hit of theirs ‘On My Mind’, and it made my night. To close out, I tried Alison Wonderland and she always pulls in the masses. She played a trap, electropop, future bass that rocked the end of the night. Unfortunately, I think the speakers in the back might’ve blown out so the sound couldn’t reach the back of the main stage. But I enjoyed watching her.

Halfway through, I caught Markus Schulz for some progressive trance. He also threw in some tech trance tracks but still kept his personality through some melodic tunes. It’s nice to see Gryffin recovered from COVID and able to play for everyone again too. His set surely rocked everyone’s world with those lasers and feels.

Overall, Beyond Wonderland 2021 was a success. I think festival season is coming back in bigger and better fashion. Even the stage designs stretched wider and taller, making the DJ look epic as they played. The Ooh Oohs and Aah Aahs accompanied the clacking fans everywhere. Hopefully, a list of live sets go out soon. Now, it’s on to the next!