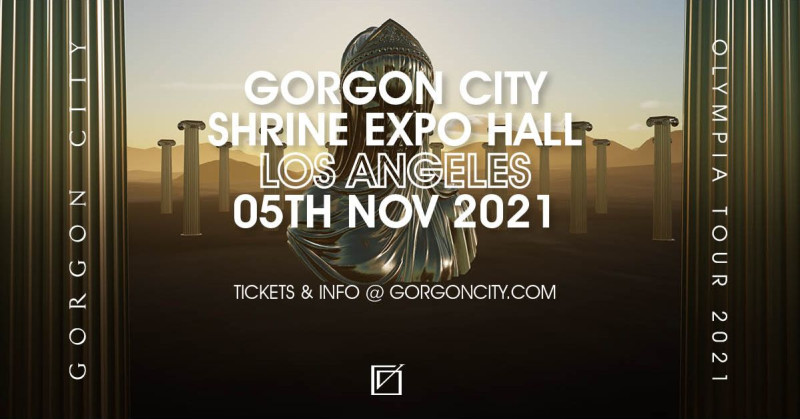 There are handful of dance music acts who took the last year & half of lockdown as an opportunity to perfect their craft, & return with a vengeance. One such act, is the North London duo known as . For proof of this, look no further than their stream of , a stream which culminated in a full-fledged 18-track . The album in question, is that of their , one which we wrote about in June of this year. In addition to this, in May, we wrote about an the duo scheduled to showcase ‘Olympia‘, known as the ‘2021 Olympia Tour‘. Today, we are happy to bring you a review of said tour. I say this, as we recently got to experience the show for ourselves. If you’re a fan of Gorgon City, you’re goin got want to follow along.

Gorgon City’s Los Angeles’ Olympia Tour stop took place at the. If you’ve ever been, I’m sure you can agree that it is one of the better venues in the city. If you haven’t just know it’s a two story auditorium with plenty of standing room, and even more for dancing. The doors opened at 8:00 PM with DJ Holographic & Local Dialect both handling opening duties. From here, PAX took the stage paving the way & setting the tone for the night. If you’ve yet to give PAX a listen, I highly recommend you do. I say this as the U.K.-based duo is known to work closely with Gorgon City.

After a brief intermission, Gorgon City took the stage, instantly pleasing the already anxious crowd. They took the stage, as if they had something to prove, and as fan, I was loving it. They played hit, after hit, to include fan favorites like ‘Real Life‘, ‘Ready For Your Love‘, ‘Alive’, and ‘Imagination‘. In addition to this, Gorgon City played newer tunes, such as their collaborations like ‘House Arrest‘ alongside Sofi Tukker, and ‘There For You’ with MK.

Along the way, the duo drop tracks from their previous ‘Realm EP‘, such as ‘Elizabeth Street’ ‘Roped In’ and ‘Grooves On The Vinyl’. Being there in person, it felt as though Gorgon knew just what the crowd wanted, and not only delivered, but did so in style. With this being the Olympia Tour, it was expected that the duo rinse the Olympia album, and they happened to do just that.

This Gorgon City show was something special. I say this, as it felt as though I wasn’t at a concert, but rather a karaoke sing-a-long instead. I say this, as the crowd sang in unison, to pearly every track they played. My favorite part of the night, happened to be when they dropped one of their latest hits in ‘You’ve Done Enough’ with DRAMA. I say this, as they brought out Via Rosa who lent her vocals to the tune, to bless the crowd with a live rendition of the song. It was one of those “you had to be there moments”. A moment, that will replay in my mind for quite some time. The duo played a bit past midnight, leaving everything on the stage.

If you’ve yet to see Gorgon City for yourself, I highly recommend that you do. This was personally my first time experiencing them live, and I for one cannot wait to do it again. The Shrine isn’t exactly known for drawing the of best crowds, but on this night, those in attendance seemed better than most other nights I’ve been. I attribute this to the crowd that Gorgon City attracts, and would be more than willing to attend another GC show here.

While the Olympia Tour is coming to a close, there are still a few stops left on the tour. Having said that, be sure to check out the remaining tour dates below. There may just be a stop near you. If not, I am positive that the duo will be back on this side of the globe in 2022. For we all we know, they might have a to showcase too.

For more information, and for tickets to Gorgon City’s ongoing Olympia 2021 Tour, be sure to check out their official website for here. In conclusion, the remaining tour dates can be found below, enjoy!

Be sure to check out our review of Gorgon City’s most recent album ‘Olympia’, .