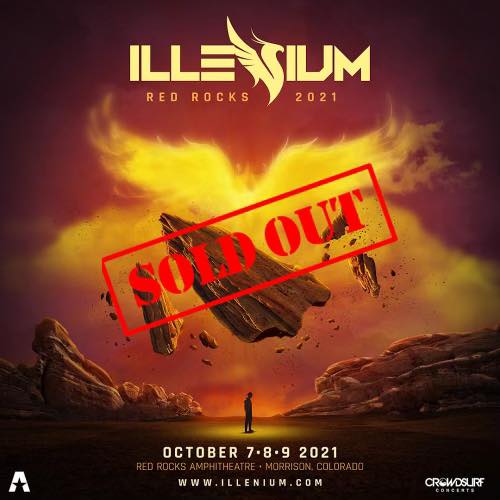 ILLENIUM will be returning to Red Rocks in Colorado for a 3-night run this October. The 3 shows will be on the 7th, 8th, and 9th consisting of a throwback set and 2 sets most likely featuring his new album Fallen Embers. ILLENIUM has been hitting us with announcement after announcement and he’s still coming.

Fans guzzled tickets in just a few minutes once they released on AXS.com. The 3 shows sold out before everyone in line could get a ticket. ILLENIUM posted on instagram:

ILLENIUM is catering to his fans and giving them a throwback set to start the 3-night run at Red Rocks. He has multiple fan favorites such as ‘Feel Good’, ‘Beautiful Creatures’, and ‘Sound of Walking Away’ that are over due for a replay. For his new sets we are sure we will set his new hits ‘Sideways’, ‘Paper Thin’, ‘Hearts On Fire’, ‘First Time’, ‘Nightlight’ and more.

The producer is giving us an absolutely massive year, with his forthcoming album Fallen Embers due out this July and several music festivals on the books. Not to mention his own festival taking place this year. A 3-night run at Red Rocks is the cherry on top. These shows are not to be missed.