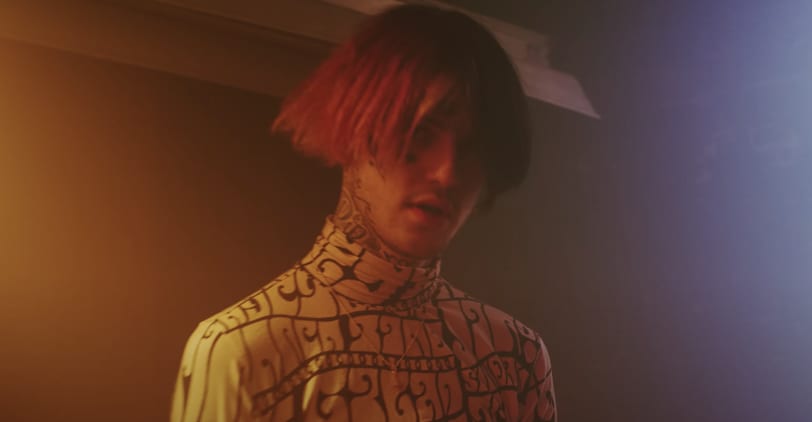 Lil Peep‘s mixtape hellboy was the best full-length project of the rapper’s all-too-short life, and last week the sample-abundent tape was released on streaming services. Today, the rapper’s estate has shared an updated version of the music video for the mixtape’s title track. The Satanic, grindhouse-esque stylizations of director Paul John’s original are wiped away to give the viewer a better view of Peep and the doves that surround him. Watch above, and read John’s statement on the making of the music video below.

April day in Chicago. It’s funny because Peep kinda got freaked out on how close the birds were getting on certain takes, and they were not letting up. The intentional bird wrangler from now and again would rattle the light fixture so the doves would go crazy but… Let me start by explaining how Peep got to midnight cinema studios. After “backseat” was released me and Gus stayed in communication, he explained how he was always looking for a good director and wanted me to shoot more videos. I was appreciative cause I loved his style.

Thanks to Mikey Cortez who put us in touch earlier days. Anyways, [Peep] flew into Chicago from Russia to start the first tour, he came right to the studios and we got started. I developed most of the scenes on the spot since it was last minute, we hung out all night, shot, and Peep stayed at the studios to rest up in between. He had a hotel but never used it, the only time I remember him leaving was to get an early morning haircut somewhere in Chicago. We worked straight through the night and into the next day, shooting and building an abundance of content for a variety of new music he had coming, [but] “hellboy” was the main focus. The next day Gus did his show at Sub-T in Chicago. Before that, we filmed in the room with the doves, horsehead was there with a teddy bear shirt on, Peep finished his show and after that came back and continued filming. The time I spent with Gus on and off camera was a memory I will hold forever. It was a weekend to remember, and here it is to show in its purity, in its lightest form, in Gus’s way. Enjoy.”