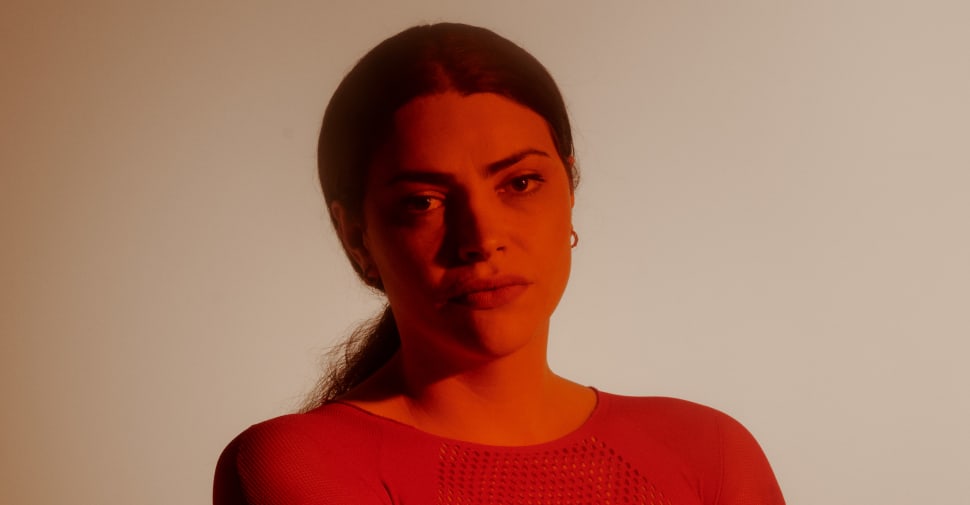 Over the past few years, as our world has become more and more stuck in the grips of capitalism and our quality of life has plummeted, a new cultural micro-genre has emerged: Films like 2017’s Ingrid Goes West, as well as books like Otessa Moshfegh’s My Year of Rest and Relaxation and Melissa Broder’s The Pisces, both released in 2018, and the 2019 TV show Euphoria all attempt to channel the dissociative state of a life diminished by modernity, each depicting heroines who look to materialist excess in order to fill some kind of void or disconnect they’re experiencing.

“Therapy,” the new single by Melbourne-based singer-songwriter June Jones, fits squarely into this emergent canon. Combining angular post-punk with immediate, indelible pop songwriting, “Therapy” finds Jones seeking human connection but finding only things: scented candles, dresses, a calculator, a clock. Her lyrics smartly convey the corrupted synapses of a brain addled by materialism, romantic gestures framed in the language of business and commerce: “You say you want to be an item/I say I want one in my hand/I want to be held like the object of your love/High in supply, high in demand.” The production here is at once airy and claustrophobic, pillowy synths filling the room and sucking all the air out of it; occasionally a hesitant, squawking saxophone rings out, almost apropos of nothing. Unnerving and beautiful, it’s a strikingly rendered portrait of disaffection.

Over email, Jones told The FADER about the inspiration behind “Therapy:”

“I wrote ‘Therapy’ after wandering the aisles of KMart, looking for some kind of object that would fill the void in my soul that day. In fact, I wrote the song using a pen and notepad that I had just bought there. I wanted to describe the experience of retail therapy in a way that is familiar to me. Growing up a child of consumer capitalism, I have a deep attachment to objects, things, stuff. The song is a reflection on the shopping centre as a place that, for better or worse, can help us find something to momentarily ease our pain.

Ironically, I suspect that a lot of the wounds that we are all trying to heal are products of capitalism itself. Alienation from work and society, tenuous access to healthcare, depression, anxiety, sensory overload, exhaustion, and a lack of existential meaning are all common experiences under Western capitalism. I wasn’t trying to write a critique of capitalism with this song, but I also don’t think it’s possible for a piece of art to be apolitical. Musically, I wanted it to be big, beautiful, punchy, and slightly overwhelming.” — June Jones

“Therapy” arrives alongside a video directed by Triana Hernandez, and is the second single from Jones’ sophomore record Leafcutter, out February 19 2021 on Emotion Punk Records / Remote Control Records. Listen to “Therapy” above, and follow Jones on Instagram here.