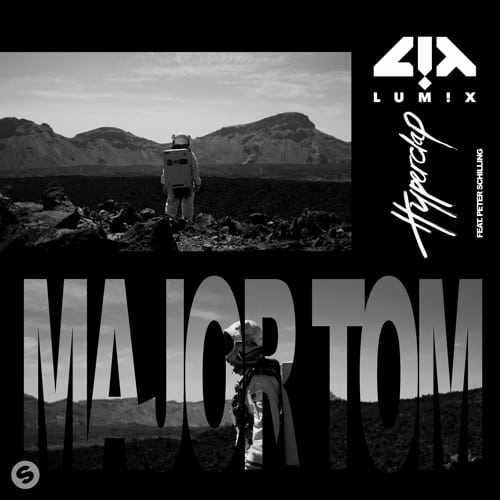 2020 was really the year for LUM!X. After already scoring a massive hit in 2019 with ‘Monster’ he permanently marked his place in the world of Dance music with numerous releases like ‘Scare Me’ and ‘The Passenger’. Now he kicks off 2021 right with an energetic slap/euro house remake of the 1989 hit single ‘Major’ Tom by Peter Schilling who himself features on this new version as well. LUM!X created this new version with Producer duo Hyperclap.

Originally released in 1982 as ‘Major Tom (völlig losgelöst)’, it meant the claim to fame for German singer Peter Schilling. The record reached #1 in his home country, as well as in Austria, Switzerland, and Canada. A year later, the English version also became an international hit, making it to #14 on the US Billboard chart. Since then, the record has been an all-time classic, an 80’s anthem that still gets lots of airplay and spots in Best Of lists.

Last year, German dance act Hyperclap revived ‘Major Tom’ into a powerful electronic track, incorporating sweet, rolling beats and mesmerizing synth chords while working with Peter Schilling himself for the original vocal lines. It meant a welcome break in the lockdown void, turning into a hit once again – by now the record is closing in on 2 million Spotify streams.

And now, one of Germany’s hottest new artists LUM!X has also put his mark on this timeless tune. Known for his huge 2019 hit ‘Monster’ and last year’s gem ‘The Passenger (LaLaLa)’ (together with D.T.E and Eiffel 65’s Gabry Ponte), he’s by now renowned for his trademark dance vibes, strong hooks, and melodic approach.

The result of this team gives ‘Major Tom’ a strong new guise. This time, the vocals are taken from the internationally acclaimed English version, while the rhythms are more pounding, enhanced by pulsating chords and cool vocal snippets, drenched in electronic effects.

It’s an incredible blast from the past, as the melodies and emotionally charged vocals of the original tune are still recognizable, but the production takes it to a whole new 2021 level. Safe to say, this is a classic reborn, and surely a hopeful start of the new year.

“The idea was born at a dinner with the A&R Team in Hamburg. I said I would like to remake this Oldschool Party classic and a short time after, Spinnin’ pitched us the Stems from Hyperclap. We finished the project together and now it’s ready to hit the dancefloors of 2021.” – LUM!X explains