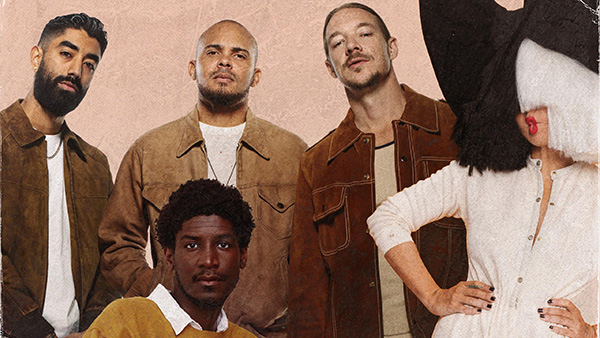 The holy Jamaican-American EDM trio, , is back with a new single titled ‘Titans‘. This spicy track is featured on their deluxe edition of Music Is The Weapon (Reloaded). It features the stunning vocals of Sia and Labrinth, who just so happen to be his two pieces to his LSD side project. This makes the second track from the supergroup, with their debut track ‘No New Friends’ in 2019.

Taking a look at this one, it’s the epitome of their excellent reggae house vibe. What’s more, is Sia’s voice makes the song fire. Está calor aqui! You’ll find yourself bopping your bodies and twirling your spines to the beat. As stated throughout the Internet, this song may make you twerk until you transform into a titan. The melody is chill and Labrinth’s cool male vocals soothe your ears. The trifecta’s production is immaculate in this song. We can definitely see this being played live.

Diplo, Walshy Fire, and Ape Drums released this album last week, with ‘Titans’ as the first track. Several Spanish-influenced tracks plus a French track follow it. It consists of 17 tracks total featuring the likes of Alessia Cara, Aya Nakamura, Rae Sremmurd, French Montana, Khalid, Nicki Minaj, and more. Breaking barriers and infusing EDM with other cultures is a wonderful thing Major Lazer has done. Their music always turns up an event or party. Plus, their performances make the crowds go wild.

The one-armed Jamaican Zombie War commando reps aim to free the universe with music. Take a listen to the supergroup’s collaborative track below. Keep the global hits coming guys!