On Sympathy for Life, Parquet Courts won’t be outdone by nihilism
Written by Robert Elston 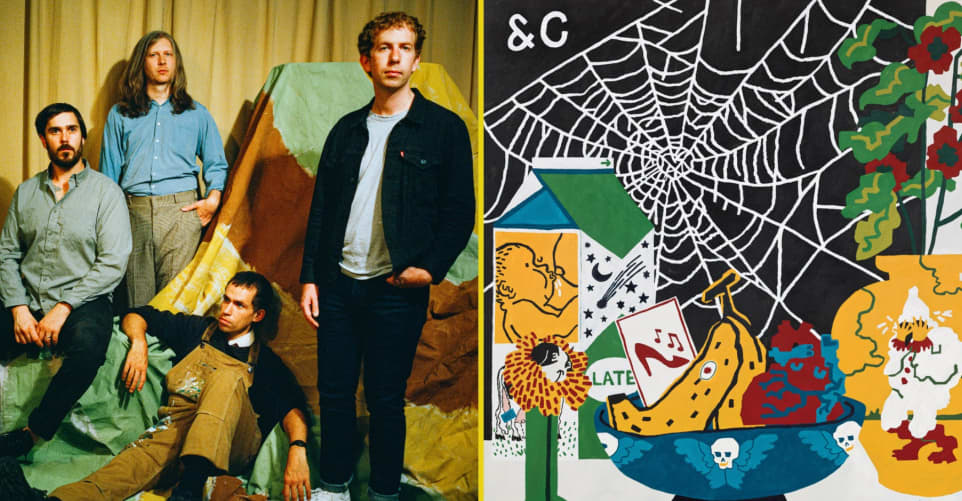 It seems obvious on first listen that “Walking at a Downtown Pace,” the first song on Parquet Courts‘ seventh album Sympathy for Life, is about returning to some semblance of normality after a year and change of lockdowns. New York, the band’s adopted home, was terrifying in the depths of the early pandemic, its uncanny silences interrupted only by frequent sirens, its bars and venues barren and vacated. “I’m making plans for the day all of this is through,” Andrew Savage sings over an incessant groove. “Seeing my path and hearing the song I’ll sing and / Food that I’ll taste and all the drinks that I’ll consume / Return the smile on an unmasked friend.”

There’s something eerie, then, in learning that “Walking at a Downtown Pace” was, like the rest of Sympathy for Life, written before the pandemic. The band finished recording the bulk of the tracks in England and flew back a couple of days before the first wave of lockdowns. They flirted with the idea of writing more, of trying to reckon with life in isolation, but eventually decided to stick with the songs they’d written pre-pandemic and just delay the release.

Or maybe they just figured it’d be hard to write anything about this COVID-mandated anti-life that they hadn’t already articulated, inadvertently, on Sympathy for Life as it was. On the slippery “Marathon of Anger” Savage sings about a “discontinued 2020” before his bandmates sing, with the cold and disaffected chirp of a corporate motivational video, “it’s time everyone gone to work.” Or try the troublingly bright-sounding “Just Shadows,” when he sings, “Suddenly I am alone / In the truest sense of the word / With nothing else to hear or watch[…] Like an inmate that’s finished his term.”

In a way Savage and Austin Brown, the co-frontman with whom he shares the lyric sheet, really did have a premonition here. Difficult though it may be to remember what life was like before the air was trying to kill us, these songs aren’t necessarily elucidating shiny new concepts. Rampant capitalism was always a bitch, the pandemic just scrubbed off another layer of its sticky veneer; depression is ever-present, but being locked inside gave it the right conditions to fester; the inability to communicate, to feel close to friends or strangers or history or community or reality, was lurking long before we were all physically shut in. The anxieties that animated the cultural conversation before — in whatever sense that existed as a fixed thing — simply swelled exponentially.

Sympathy for Life is Parquet Courts’ most dynamic album, a concerted attempt to bring in Primal Scream‘s psychedelic fits and the sounds of New York nightclubs, a more potent concentration of the syncopated grooves they borrowed from Fela Kuti and David Byrne on their last album, 2018’s Wide Awake! It pushes them to fascinating places; the Madchester-inspired “Plant Life” is about as far away from “Stoned and Starving” as they’ve strayed, while the industrial “Application Apparatus” rattles around like a Devo song.

In recent interviews they’ve talked about going to more dance parties before writing the album, wanting to bring that atmosphere — the feeling of connection, the inclusive nature — to their own music. That’s a bold idea, especially for a band whose early albums buried whatever groove existed beneath howls and distortion. But it works here, not least on the genuinely fun “Zoom Out” when they sing together, “We got dancing / We got screaming / We got laughin’ / And we got feelin’.” (It’s important to note that Savage prepared for the writing process by traveling to a remote part of Italy, tripping on acid, and lifting weights. If you want to be at peace with the universe, “trippy lifting” — his words — sounds like a good route.)

In that respect Sympathy for Life is a different, perhaps more subtle, way to attack the same problem they encountered last time out. “Total Football,” the opener on Wide Awake!, nodded to the Dutch soccer teams of the 1970s, their fluid, positionless style of play, a collective spirit that meant everyone on the field had to understand how to fill in for a teammate at any moment. It was, Savage told the NME at the time, a way to express something that had made him feel hopeful in the depths of the Trump presidency: “This kind of new energy that I think is happening in America where young people are starting to have more of an inclination towards collectivism and less of the kind of hyper-masculine super individual cliché that America has emphasised.” The grooves on Sympathy for Life are a new way of communicating that need for community, another way of shouting, as Savage did so satisfyingly on “Total Football,” “fuck Tom Brady.” And, a little like hearing him shout “fuck Tom Brady,” it’s joyous and irrepressible.

How, though, did Parquet Courts end up making an album like Sympathy for Life at all? Queer Salutations, the underrated debut album by Savage’s college band Teenage Cool Kids, spat directly in the faces of preening hipsters and their assiduously curated lifestyles. Fergus & Geronimo, the altogether stranger band that Savage formed alongside Jason Kelly not long before Parquet Courts took off, often seemed to be playing a practical joke on those same trust fund bohemians. Both bands were great, and there’s nothing wrong with the throughline — lampooning the hopelessly lampoonable is a worthwhile endeavor. But they did set Savage up as an outsider, the wilful odd man out, snarky and booksmart and sick of your shit.

That outsiderdom carried through to Parquet Courts. To take an extreme example, their atonal and jam-heavy 2015 EP Monastic Living had only one song with vocals, and that was just Savage rejecting everything, shouting that he didn’t want to be a poet or an influence or a memoirist or someone who could be “cited.” It wasn’t self-serious — the song was, they wrote in the liner notes, “self-righteous, preachy morality shouted by a pure-fool” — and they refused to do interviews around the project. It was an absurdist art-punk experiment from the smartest kids in the room. But however funny and well-deployed it may have been, “No! No! No!” is the sort of distant wiseassery you can’t imagine them pulling anymore.

The Parquet Courts of Sympathy for Life is altogether different. They yearn for connection and community and, above all, seem pretty convinced of the best ways to realize them. Some of that’s in the rhythms and Screamadelica allusions, but it’s present in the lyrics too. Over and over again Savage and Brown express a deep discomfort with pernicious technologies, algorithms that flatten the senses and dull lived experience. On “Just Shadows” he tears into doorstep deliveries “optimized for pleasure,” rifling off lines about a “police state / Fodder to a vast database,” heavy with sad irony when he sings, “Curated life agrees with me / Programmed to know when I should sleep.” On “Application Apparatus” a “friendly speaker tells me ‘in 1,000 feet’ / 5G signal, guides my hands to shift the gears.” “Homo Sapien” features a “TV set in the fridge” with “a voice that recites the news and leaves out the gloomy bits.” Up against this faceless, screen-lit dystopia, dropping acid and screaming (or lifting weights) isn’t just an outlet, it’s a weapon.

This has been a theme for Parquet Courts from the very start. The title track from their debut American Specialties had them rolling their eyes at “TV channels and computers / Facebook pages, boring, boring.” The title track from 2014’s Content Nausea, the name of which is a giveaway in itself, had Savage breathlessly trying to recreate the exhausting endless scroll with his voice: “In the grips of bad dimension / Too much data, too much tension.” They were righteously cynical and, as time went by, increasingly intent on diagnosing some cultural sickness.

But over the past half-decade in particular, Parquet Courts have turned that cynicism into erudite criticism, and they’ve done so without diluting the energy that made them so compelling in the first place. When Savage sang “I can’t count how many times I’ve been outdone by nihilism” on the Wide Awake! closer “Tenderness,” he seemed to have been directly rejecting the philosophy behind that opening song from Monastic Living — and the title of that EP too. Parquet Courts weren’t picking away at society’s ills from a safe remove anymore; they’d been dragged into the world and forced to reckon with its monotony first-hand.

In flashes, it’s even pushed Savage dangerously close to memoir, and that gives us Sympathy for Life‘s most beautiful moment. “Pulcinella,” the last track on the album, is a love song, stripped of the grooves and the bleeps that energize so much of the album. It’s the type of thing you couldn’t have imagined Parquet Courts writing a decade ago — though even through the lullaby the jagged edges still cut familiar shapes — and it’s proof that to them expansion means exploring in all directions, not just incorporating one new sound. Lyrically it’s about connection again, more personal this time but still familiar when Savage sings that he doesn’t want to be lonely anymore. That he’s pulling from Renaissance comedies doesn’t make the last line seem any less like a premonition: “‘Darling it’s me,’ as the mask comes off / ‘It always was.’”