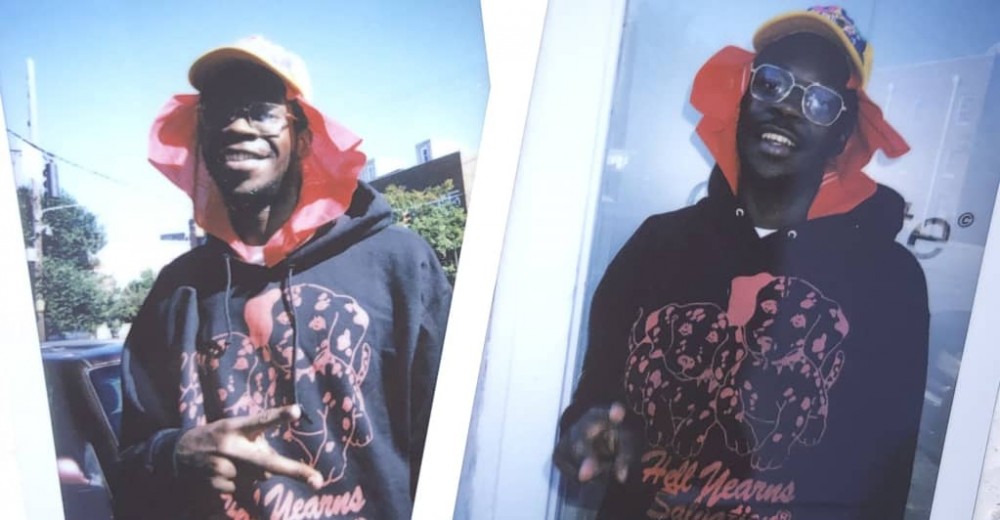 The night before this interview, Popstar Benny was up late putting the final touches on a project. At 4 A.M., he suddenly dropped farrisbenny!, a sample drill mixtape with Bear1boss inspired by the wave of 2000’s hit-flipping that’s taken over New York. It was something different for Bear, the Buffalo-born, Atlanta-based artist Benny manages, whose music typically sounds something like throwing the Rich Kidz, Lil Uzi Vert, and a scoopful (or four) of sour gummy worms into a blender. I ran through it once when I woke up to take some notes and prayed there wouldn’t be any other surprises that morning. And then, an hour before we hopped on the phone, Benny announced that his own album was on the way. It’d feature Bear, longtime collaborators like Tony Shhnow, and, unexpectedly, a brief appearance from MIKE whose sepia-tinted raps couldn’t be further away from Benny’s bold, colorful universe. This hectic, seemingly mercurial release schedule is a monster of the Atlanta producer’s own creation, but he wouldn’t have it any other way.

“In my spare time, I just be listening to hella music,” the 26-year-old producer says. “So it goes full circle. It’s me being bored, making the stuff that I want to hear, and putting it out ‘cause it’s not gonna do me any good to just sit with it.”

Benny says his music is “the soundtrack to a video game that doesn’t exist.” His beats roam from atmospheric takes on plugg to Zaytoven tributes filtered through a Nintendo 64 sound card. On some songs, he’ll dabble in pluggnb, a sultry offshoot of the sound created by the BeatPluggz producer collective that pulls from 90s R&B. On others, he’ll turn the aggressive, synth-heavy rage beats innovated by producers like F1lthy into sparkling crystalline towers. Benny’s eccentric production has made him a fixture of Atlanta’s sprawling underground, where he started out as Larry League’s DJ. In 2016, he branched out on his own to start his own independent label Popstar FM to release his compilation tapes and one-off singles highlighting the community he’s built around himself.

Benny has always been prolific, but in 2021, he shifted into high gear, and it’s been his most successful year yet. In August, he contributed to the deluxe edition of Rod Wave’s SoulFly (“Take the Blame”), which marked his first-ever contributions to a soon-to-be platinum album. While he was proud, it’s not where his energy was focused for the majority of the year. Of the nine mixtapes and EPs Bear1boss has released this year, Benny’s name appears in the credits of all but one. During our phone call, Popstar Benny spoke about being inspired by Cashmere Cat’s remixes, seeing his music pop up in leak/snippet collections, and pushing artists out of their comfort zone.

The FADER: When you quit your last job in 2019, did you have a moment where you realized that you were like, “nah, all I want to do is music”?

I had that moment early in my college career. I was just getting different opportunities that had me distracted when I was in class. I dropped out to focus on it. So it was always in the back of my head, but my thing up until 2019 was keeping it goal-based. I was like, “if I go hard enough, I can get to a point where all I can focus on is creating art.” I think it was that summer I got my second album placement with Rod Wave. When that advance came, I just quit and was freelancing from there.

Where do you get your inspiration from?

In 2013, 2012, I was the hugest fan of Cashmere Cat and Fool’s Gold [Records]. Them taking the electronic-leaning styles and dabbling into remixing, blending the two worlds where it’s still spacey and weird EDM, but the drums would tie it together. That’s the thing that always struck me, where no matter how strange it gets, if the drums are what they’re supposed to be like, it’ll tie it together. Anything that sounds cool to me, melodically, I’m not afraid to fuck with it ’cause I know the right drums can like still tie it together.

Do you think that people get caught up in trying to define microgenres and subcategories?
A lot of the microgenres that came up are really just extensions of main things that already have a thing. Pluggnb is just R&B leaning plugg, you know? Rage you could say is plugg beats with a little more electronic leaningness. I feel like that’s just an internet subculture of folks wanting to identify their own little thing. But I think in general, a lot of things [are] offshoots of each other. That’s the thing that I fuck with. I feel like if you understand the root of them, then you’ll always be good with whatever side thing comes out. ‘Cause it’d be like, oh this is just that element from over here, you know, slightly did with this twist.

Whenever I stumble onto someone from Atlanta’s underground and feel that their name is kind of familiar, I go and look through their past stuff and I see your name pop up in their production credits.
I’m a huge Pharrell fan—that was really my whole model with this going in. Of course I want to aim for bigger names, but I always fucked with when [the Neptunes] would find people and help them build their sound. It might be someone completely unheard of and they’ll do three, four songs on their album and then they’ll turn around and do Britney Spears, and then they’ll do some rock shit. I’m just trying to be in as many realms as I can be in.

Bear1boss has been everywhere this year.

The crazy thing with Bear is I was just a fan of his music for a couple years on some random ‘I saw him on Instagram or SoundCloud’ type shit. I would send beats to the email, but nothing really stuck. I think at end of 2019, I was DJing at his show and his DJ couldn’t make it so I had to spin his music. I saw him perform and he literally sung, danced, rapped for 30 minutes straight. His DJ made like a mix for him since he couldn’t be there. It had like all the drops, all the horns and everything. He knew every exact thing, like if it’s seven seconds of silence, he’s ready as soon as it drops. I was like, “yo, this nigga’s insane.”

It might have been like 15 people at that show, but he was performing like it was Coachella. After that I was a super-duper fan, but then randomly months later in the year, me and Ziti were making a whole bunch of beats. He was like, “yo, I got session with this dude. Can we send over those recent shits we did?” And then he recorded “Xan!” and another song with him the first night. And then he was like “yeah, he don’t got nothing else going on this week.” Over the next two weeks we just recorded pretty much every day or every other day and did 20-something songs, dropped that as America’s Sweetheart and that’s what got the ball rolling.

You’ve been working with Rod Wave ever since Hunger Games 3 in 2018. How’d you first get stuff with him?
It was an A&R at Alamo. We had Lil Wop on some of the Popstar FM albums and then he signed with Alamo later that year. And I was on like a Lil Wop tape, too. He had just been seeing me throughout that summer. He was like, some of the artists from Alamo are in town and if I wanted to come through for a session and play some beats I could. When I got off work me and my homie Mike had slid. Rod was in one room and the other artist was in like the other room. I think Rod was like midway through a song, so I just started playing beats for the other artist.

I didn’t even have a folder. I just had my laptop and, bruh, I swear, every single beat that the first nigga heard, like he was like, “no, no, no.” He let me play like at least 50 or 60 of them and within like 15 seconds it’d be like “nah.” I’m like, “Bruh please just be like, I don’t think we vibe.” But Rod’s manager, he would hear some of them when I was playing and be like, “hold this to the side for Rod.” When I finally got in the room with Rod, some of the ones that the manager had picked out he loved. He pretty much freestyled “Pressure” when he heard the beat.

There’s also that one song you have with him, “Rock and Roll” that’s been floating around as a leak.

When the album dropped, I started tapping into one of the fan pages. They was showing me the “Rock and Roll” [snippet]. And there’s another one, I think called “Be Free,” that folks been waiting for. I was checking TikTok, they got this shit with literally hundreds of thousands of likes on it! I was watching this NPR Tiny Desk and he threw in the lyrics for it at the end. So he’s been teasing it over the year.

Does it feel weird seeing your music ending up in these leaks?

It does because I used to be like that for other artists. I just didn’t know that it existed for Rod Wave. It’s just some cool full circle shit. I’m used to being on the other end of it, tracking down the little exclusive rare tracks for my favorite folks. I’m pretty sure I might have some low quality Uzi snippets in my DJ folder.

The beats you give him aren’t really the kind of stuff you expect him to hop on. It’s not really riding that sad guitar wave.

I guess that’s why he still reaches out. I know how to get within that zone of stuff, but not have it be a complete duplicate of what he does. I got family in Florida, so I’ve been there over the years and fuck with the music heavy. Just knowing Florida music a little bit gives me an edge with making beats for him.

How do you get artists to trust you with these weirder beats, like the ones that are basically all negative space and 808s? Do you have to convince them to get on those?

It’s the Pharrell effect, man! I watched him do it with all the folks. He used to be like, “Alright, you’re known for this sound, but there’s a whole space that you haven’t touched. So how can we overlap?” That’s like my perspective. I know what drums are gonna move folks. If it’s knocking, they’ll be a little bit more willing to take it there. “Hollaback Girl,” that’s just like a stomp clap. But it’s groovy enough and hard enough to make people fuck with it. At the root, weirdness is a factor, weirdness helps. I could definitely make the baseline ones that are hard, but I would rather make weird ones that are still hard just because it’s what I would like to see in the world.