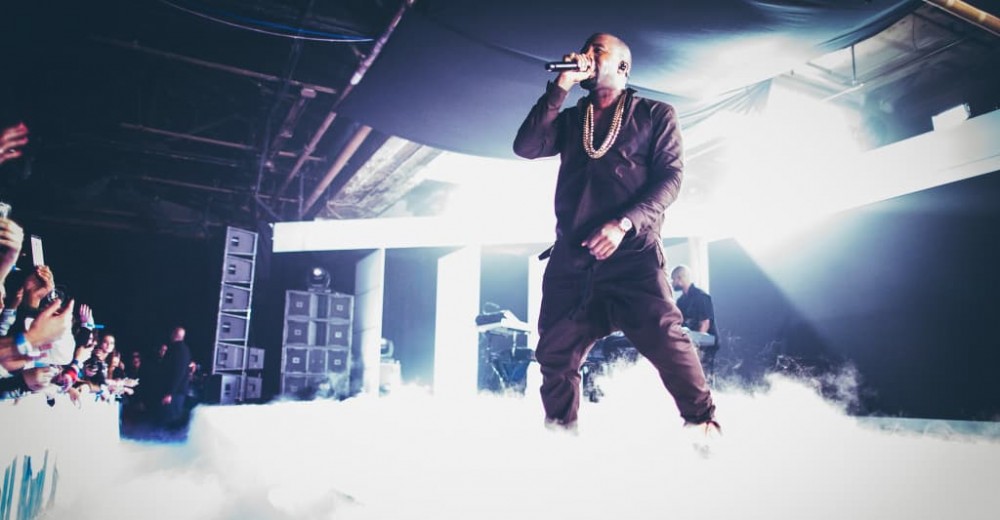 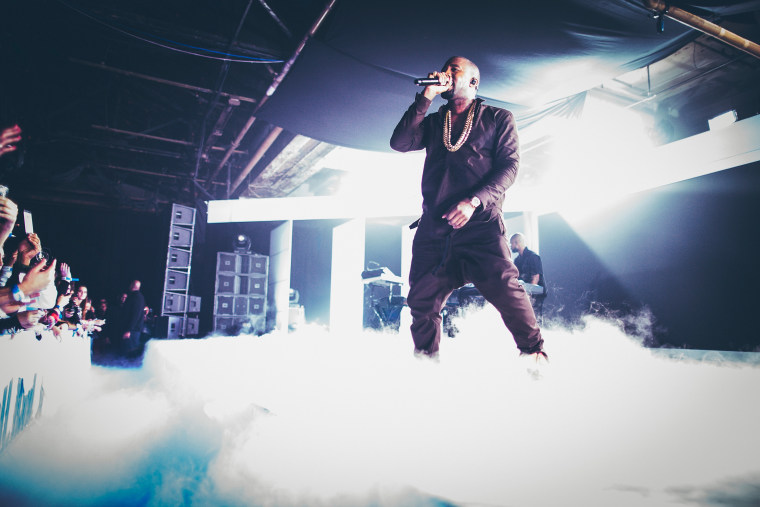 The stage is set in the Mercedes-Benz Stadium in Atlanta. The crowd is gathering. The overpriced chicken tenders are frying. It’s go-time for the second album release party for Kanye West‘s tenth studio album Donda. The first event took place on July 23, and although the album was promised to come out after it was premiered in full, it was pushed back to August 6 and Kanye took up residence in the stadium to finish the project. While we wait to see if it does indeed drop at midnight, the second listening event is scheduled to begin at 9:30 pm EST tonight with a livestream exclusively on Apple Music. We’re tuned in, and you can follow along below. Keep refreshing to keep up:

11:53pm: And that’s a wrap. Thanks for tuning in. I’m off to cancel this Apple Music trial before I forget, someone please tell me if the album actually comes out!

11:51pm: Unfortunately, Kanye left one of his jackets on a floor-mounted camera, partially obstructing this otherwise impressive shot.

11:50pm: Sorry, just wasn’t expecting Kanye to get pulled into heaven. That’s wild. And quite nice.

11:45pm: What was Jesus’s official position on cocaine, anyway?

11:44pm: Would have loved if The Weeknd had made a cocaine allusion next to his Jesus references, but you can’t have everything.

11:41pm: There were rumors of a collab with The Weeknd and Lil Baby on this album, and they were true.

11:37pm: That song’s going to be huge on divorced dad TikTok.

11:31pm: Pop Smoke’s vocals on this song are “Tell The Vision,” a song on his album Faith. The scratchiness and poor quality suggest Kanye got the acapella by filtering out the rest of the song. I really like it!

11:26pm: During his visit to the Oval Office in 2018, Kanye West asked Donald Trump to grant clemency to Larry Hoover, whose son we just heard. No pardon was granted.

11:24pm: Kanye’s website has been updated with new merch: a long-sleeved shirt and a pre-order for Donda. Notably, there’s no set release date listed for the album.

11:19pm: I’m going to have to spend some more time with his Jay Electronica verse before I decide whether or not it feels like he’s cornering me at a party to talk about conspiracy YouTube.

11:12pm: “Tell me if you know someone that needs Jesus.” Somewhere in that stadium right now, someone is singing along with a mouth full of $40 kettle corn.

11:12pm: More jibberish placeholder bars suggest that the version of Donda we’re hearing is not the finished version. We’ll see.

11:11pm: Oh God, I just remembered: is he still planning on running for president?

11:07pm: I would go back to church if Westside Gunn was a preacher. And if you could eat inside.

11:03pm: I’m impressed by these features so far. It’s something Kanye has always done well, obviously, but it’s rare that a modern rap album feels better for an abundance of features. Roddy Ricch still sounds like a star.

11:00pm: I wasn’t a huge fan of Kanye’s texting angst on this song a couple of weeks ago, but the Graduation vibes are keeping me on board.

10:59pm: The voice repeating the name of Kanye West’s mother over and over is… unexpectedly emotional.

10:58pm: Kanye currently sitting on the bed in that fat puffer jacket looking like Fashion Kirby.

10:57pm: Kid Cudi’s “Killa Cam” lyric is making me wonder if Kanye flew in The Lox after last night’s Versuz.

10:54pm: Another very promising song that sounds very unfinished. I’m starting to doubt that the album is coming out tonight.

10:49pm: Fivio Foreign is rapping like he’s trying to make people forget about “shittin’, poopin.” He may pull it off!

10:45pm: Durk’s verse may be one of the most heartbreaking of the year so far.

10:37pm: Playboi Carti on this beat — a filthy kick and a church organ catching the holy spirit — feels perfect.

10:37pm: The spiky jacket is officially on. So are some crazy cybergoth boots. Kanye looks like the coolest kid at the Cure show. This fit is easily better than the last listening party’s.

10:35pm: Baby Keem, who was on July’s version of Donda, returns on tonight’s project.

10:33pm: As a procession of cloaked individuals take the stage, Travis Scott and Kanye trade bars on a new song.

10:12pm: Kanye has entered the chat! He’s on stage and playing Donda.

10:12pm: There may be dancers onstage this evening…

9:56pm: The video feed is back (or perhaps it never left and I just don’t know how to use Apple Music) and it’s showing the same scene as before. No sound yet.

9:45pm: Kanye’s ex-wife Kim Kardashian is in the building, just as she was for the last Donda listening party in Atlanta

9:38pm: The video feed was briefly up for a second. We saw a mattress, a candle, and Kanye’s spiky Balenciaga outfit laid out on the ground. Ominous!

9:34pm: A preorder for Donda is up now on iTunes with an “expected date” of August 9. It may still come out tonight, so calm down. Or don’t. No one can really blame you at this point.

Breaking: Kanye West’s #DONDA has 24 tracks, based on the pre-order now live in iTunes. pic.twitter.com/uVIQmT9W0r