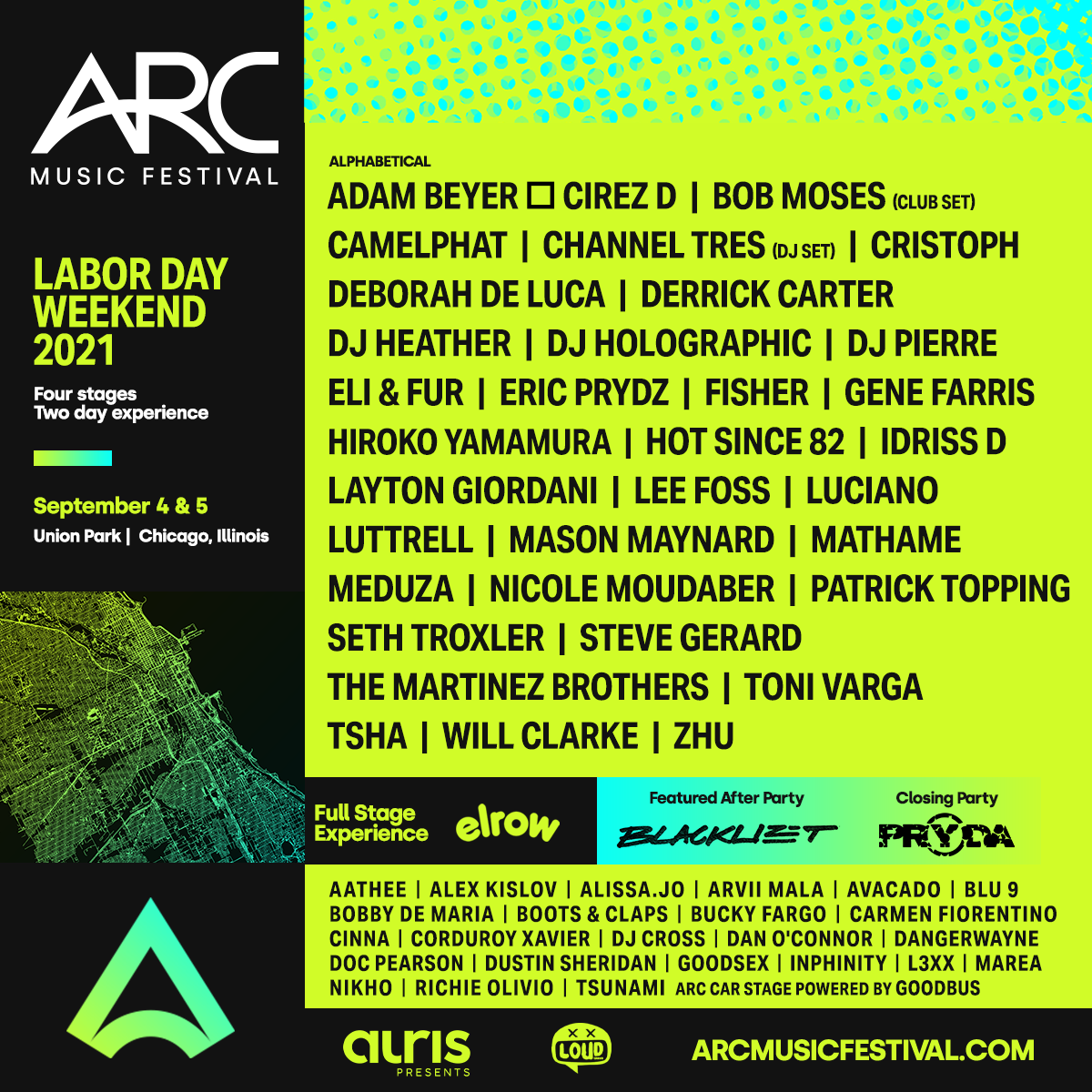 Labor Day Weekend is already upon us. While it signals the end of Summer for many up North, Chicago is going out with a bang. A brand new festival featuring the best of techno and the underground is the place to be this LDW. ARC Festival boasts an epic lineup of heavy hitters, rising stars, and future favorites. We’re going to highlight a few sets you absolutely cannot miss at ARC Festival.

You can get your festival tickets here.

This one is really a no-brainer and by far the biggest draw of the entire music festival. Since this epic project made its debut during , ABCD shows have captivating audiences and sold out in record time. In fact, this anticipated pairing has only ever performed a handful of times. Better yet, the last time we saw an ABCD set was Creamfields back in 2019, nearly two years ago! This will be the first time Chicago gets to see the show, and it will mark the return of the Adam Beyer Cirez D Project. Get ready for (hopefully) 2 hours of rip-roaring techno, featuring the latest and greatest from Drumcode and Mouseville.

Bonus: Adam Beyer will be hosting his Drumcode afterparty on Saturday night for a double-helping of techno.

Ok so we’re cheating, but seriously Eric Prydz got his own billing and he deserves his own separate listing. After you get the (Cirez) D on Saturday, you need to get the full Eric Prydz experience on Sunday. You’ll be sure to get a progressive Pryda affair heavily influenced by the fact that he just performed as Cirez D the day before and by the fact that this is an underground music festival. Expect a solid festival set and pray for a closing track besides OPUS.

Bonus: Eric Prydz is hosting a Pryda Closing Party Sunday night at the gargantuan Radius Nightclub. This venue is huge and the perfect place to see Eric drop tracks like Rebel XX or Exchange Finale. It’s already sold out.

Layton Giordani is one of the up-and-comers on the list that you absolutely need to check out. He was a late addition to the lineup, and one we’re psyched to see. Layton is a native New Yorker and a rising star in the Drumcode stable. Get ready for a set of pulse-pounding dark techno, in the same vein and style as Adam Beyer himself. You’ll undoubtedly hear a number of bangers in this set. He’ll also be joining the label boss himself for the Drumcode Afterparty on Saturday.

Mathame is yet another newcomer to the scene and is a duo you need to see. They hail from Italy and produce music mostly on the Tale of Us Afterlife label. Their dark brooding breed of melodic techno will pull at your heartstrings while intoxicating your body with infectious beats. You’ll hear some of their legendary tracks like “Nothing Around Us” and “Skywalking” along with a host of amazing remixes and IDs. While we don’t have Tale of Us at ARC, Mathame is the next best thing.

You might think of Meduza as more a “radio-friendly” artist, being as this group has produced a number of radio hits. However, when Meduza throws down a live set, you will be surprised at how dark and groovy it will get. This is not just a set of singalongs with a break in between each one. Be prepared for Meduza to take you on a journey peppered with instant classics, remixes, and tracks you never knew you needed to hear.

Will Clarke is no stranger to the underground, and he’s the second artist on this list to have performed at Space Miami over the past few weeks. Soon he will be joined by Meduza as well. Will is sure to play a funky set for ARC, and when asked about the festival he was very excited for it.

“Chicago is one of my favourite cities in the world to play, however I feel like up to this point Chicago hasn’t had a festival that reflects the heritage and quality of its history in electronic music. ARC has done that and is bringing a high quality house & techno festival lineup to the birth place of house music. I can’t bloody wait to be a part of it!”