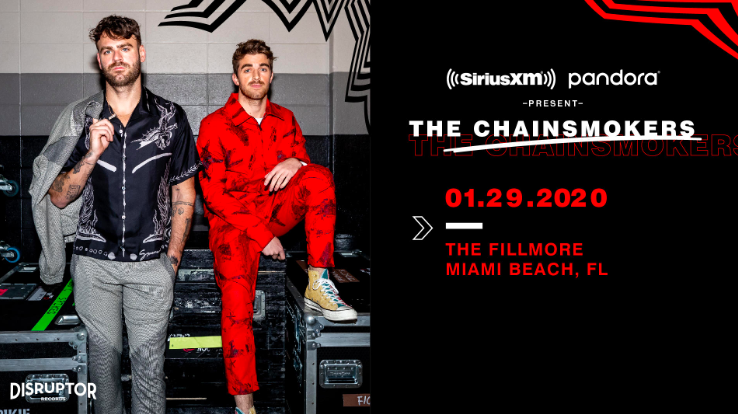 Do you use Pandora or have a subscription with SiriusXM? Are you in Miami on January 29? And are you a fan of The Chainsmokers? If the answer is yes to all, then you’re in luck — SiriusXM and Pandora just announced the latest events for Super Bowl week as part of the companies’ Opening Drive Super Concert Series. And you guessed it — a free concert featuring The Chainsmokers is one of them!

MIAMI! Ahead of the Big Game, we’ll be performing a show with @SIRIUSXM and @pandoramusic on January 29! You won’t want to miss it! RSVP for free: https://t.co/Y2AD6CkTMB #SiriusXM pic.twitter.com/CpFWBxYhh7

“We cannot wait to bring our full band show to such an intimate-sized venue on Big Game weekend with our good friends at Pandora and SiriusXM.”

The free concert will take place on Wednesday, January 29 at 9pm ET at The Fillmore Miami Beach. SiriusXM subscribers in the U.S. can tune into the show live via SiriusXM radio or the SiriusXM app. Pandora NOW will also be replaying the performance on Saturday, February 1 at 8pm ET.

The Chainsmokers appear to be a hot choice for Super Bowl LIV festivities, who will be headlining the 2020 Maxim Big Game Experience. With so many of their tracks making their way to music charts, it’s understandable.

That being said, don’t miss the chance to be a part of this intimate performance during Super Bowl week! If you meet all the criteria, head over and RSVP for free here.