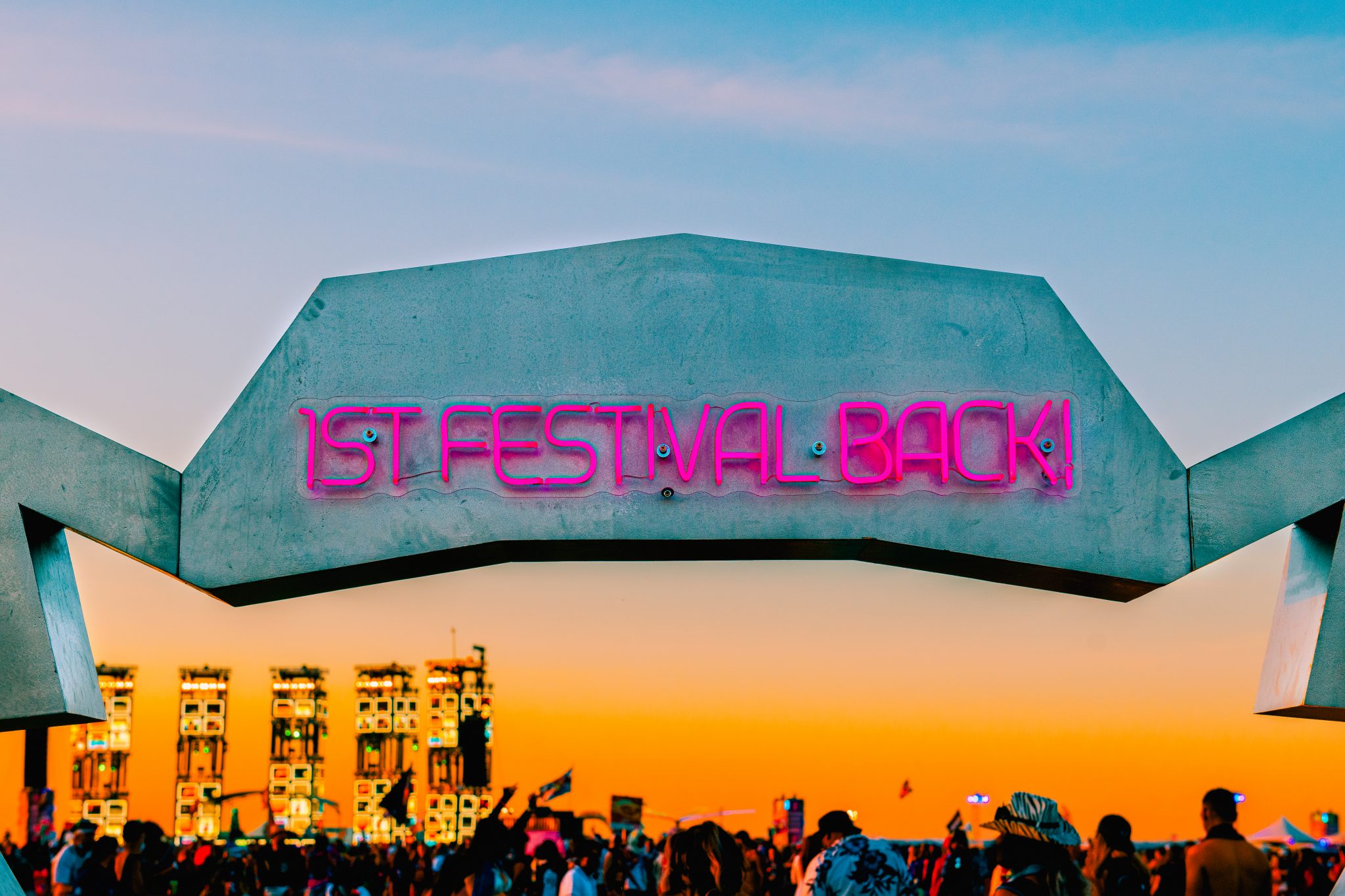 Hate ’em, or love ’em, Disco Donnie has been instrumental in the birth and growth of rave and festival culture in America. For proof of this, look no further than Texas’ very own festival. The two-day festival was held from April 24-25 2021 just outside of Dallas at the Texas Motorplex in Ennis, Texas. Over the course of two days, Ubbi Dubbi welcomed over 60,000 attendees who were all looking to get their fix of live music, myself included.

Naturally, there was some worry about Ubbi Dubbi being a ‘super spreader’ event, but the team behind the festival seemed to have things under control. There were a number of protocols in place to promote the health & wellness of attendees. Some of these protocols included a reduced capacity of 50%, instituting Health-Passes via the CLEAR app, and requiring masks on all attendees.

In addition to this, Disco Donnie employed COVID-sniffing dogs, as well as an express entrance lane dedicated to vaccinated attendees. Additional staff was also brought on to help with ensuring attendees wore their masks. While there is no way to ensure 100% safety, it’s worth pointing out that the promoters did all they could.

When I first heard that Ubbi Dubbi would be taking place I immediately took a look at the lineup. After seeing that the lineup consisted of some of my favorite artists, I instantly knew I had to be there. The initial lineup consisted of heavy hitters such as Adventure Club, Camelphat, Green Velvet, Illenium, Kaskade, & Seven Lions. In addition to this, I noticed that there were also numerous artists whom I had grown to love over the course of quarantine. Some of these were house-based artists, such as Franky Wah, Kyle Watson & Tiga. Nearly all of the artists who fell into this category didn’t make it. This included Camelphat. To say that I was heartbroken would be an understatement.

In the lead-up to the festival, Ubbi Dubbi announced numerous artists wouldn’t be able to make their scheduled appearance. This was due to international travel restrictions and other travel related issues stemming from from their respective home countries. While this situation wasn’t ideal, the festival handled it rather well, finding replacement artists at what seemed like the last minute.

We saw the addition of artists such Bailo, Boogie T, DJ Tennis, Eazybaked, and LP Giobbi. In addition to this, Luke Andy, Omnom, Seth Troxler, Wooli, and Yolanda Be Cool were added as well. Its worth noting that Morten brought his signature future rave sound to the Texas Motroplex, and that Carnage & Kill The Noise were brought in as last-minute substitutes for Zomboy. While I was initially dismayed at the lineup changes, I couldn’t help but feel relieved they were able to secure replacement talent.

Ubbi Dubbi covered all the bases in regards to house and bass music. The festival saw Liquid Stranger and what seemed like the whole Wakaan roster on the lineup since there was a Takeover scheduled for day 2. House heads were happy too, as Seth Troxler, Destructo, Luke Andy + more all brought the heat.

I personally had the chance to check out Joyryde‘s set and was utterly blown away at the madness that ensued. I’ve seen bits and pieces of him here & there, but have never quite got the chance to experience a whole set. To say that I was blown away is an understatement itself. The energy he brought to his set was unparalleled, and reminded me of Skrillex during his mothership days…amazing.

In addition to Joyryde, I was able to witness a bit of Seven Lions‘ set, as I returned to prepare for Kaskade. Prior to this, I had managed to slip away from the main stage. This was in order to witness some rail-braking in person, à la Riot Ten. I was not disappointed. Riot Ten has a penchant touch for mixing memorable, danceable, and singable hooks into dirty, bass-laden drops. Due to horrendous traffic on the way to the festival, I wasn’t able to get there as early as planned. This was despite leaving with adequate time from Dallas, but more on this later. Despite all of this, there was one artist I made sure not to miss, and this was that of Kaskade.

Kaskade has been one of my favorite artists for a very long time. I’ve seen the man upwards of ten times, and while he always brings the heat, his Ubbi Dubbi set was unreal. While there, it was easy to see that Kaskade was just as ecstatic as we were to be in attendance. You could hear it in his voice, and in the way he was talking to the crowd. I say this because he doesn’t typically jump on the mic as much as other artists do. He is one of those ‘let the music speak‘ folks and it’s honestly one of the reasons I love him so much. If you’re a fan, I’m sure you understand exactly what I’m talking about.

While we’ve seen play livestream after livestream over the course of the last year, the man does his best work in a live setting. He’s a DJ, from CHICAGO, which I honestly think is lost on a lot of people, given his now mainstream appeal.

The way in which he’s able to read a crowd and build energy around his set is unmatched, especially when it comes to the main stage. Where most artists have their brand/ genre/ gimmick that they stick to, Kaskade is a jack of all trades. Over the course of his set, we were blessed with everything from classic house, to deep, progressive, & everything in-between. We even got a little bit of big room and electro. When I say this set was a masterclass in technique, I mean it. Do yourself a favor, and check it out. You won’t regret it.

On the second day, my group and I left for Ennis a bit earlier in anticipation of the horrendous traffic we experienced day one. We proactively payed a farmer to park on his land, hoping to circumvent the traffic/parking fiasco we encountered the day prior. After arriving to the venue it seemed as though our plan was in vain, as the traffic/ parking issues were somewhat alleviated. I say this, as I could see the other attendees easily making their way into the venue. The day prior, admittance was but a trickle.

For me, the second day was a bit busier, as there were more artists I wanted to see. Over the course of six hours, I managed to squeeze in nine different artists. This included Morten, Valentino Khan, Carnage, and Illenium, who I spent most of the time at. In addition to this, I made it a point to see Shiba San as well as Liquid stranger. As the festival came to a close, I skipped out on Illenium and made my way to the Zoom Room, which is where Green Velvet was playing at. It was easy to see that many others also had that same plan.

The Texas Motorplex in Ennis, Texas was a fantastic location to hold Ubbi Dubbi in 2021. The venue itself was great. Open air and lots of space, with not too much noise bleeding from the respective stages. Parking and traffic on the other hand were a complete mess. Day one saw attendees stuck in traffic for over two hours, with many leaving their cars along the side of the road, opting instead to walk their way into the venue. I had similar qualms from those in camping, who had to lay their tents in less than desirable spots, due to the lack of suitable space.

The entrance to the event was on a two-lane highway, which evidently could not accommodate the large crowd that the event brought. I feel a bit bad for the locals who may have been trying to commute through the area. I hope there were detours set in place, if not, It may be something to consider for next year’s event. Despite all of this, It was easy to see that most attendees were having a blast, and did not let these minor inconveniences get in the way of having a good time — once they made it inside of course.

Looking back at Ubbi Dubbi 2021, I couldn’t be happier to have attended this special event, especially after the wild year we all had in 2020. After having made the trip, I feel as though everyone else in attendance felt the same way. Despite how you might feel about a festival of this size being held ‘in the middle of a pandemic’, it should be noted that Texas is fully open, and has had its mask mandate lifted since March 02, 2021. It will be neat to see if the rest of the industry follows suit after this.

Furthermore, in the lead-up to the festival, Ubbi Dubbi’s parent company Disco Donnie Presents (DDP) announced that the company donated $15,000 to three Texas Food Banks in the wake of the ice storm. In addition to this, post-festival, Ubbi Dubbi and Disco Donnie Presents announced a second $10,000 donation. This was made to the local community program, Ennis CARES. Fun aside, it’s nice to see organizers & promoters using their platform for good.

If you were in attendance, i’m sure you would agree that the energy in the air was unreal. It was unlike your typical festival, in the sense that everyone there wanted to be there. I couldn’t help but be reminded of rave days from times past, where the vibes were immaculate, if not otherworldly.

Quite literally, the emotions were palpable and could be heard not only through music being played but in the voices of our favorite artists, but even Donnie himself. For a perfect example of this, check out what he had to say at the end of Illenium’s set on the final day of the festival:

“This one’s gonna be hard….. I wanna thank my team. I told them 7 weeks ago that we’re fucking doin it. They put all this shit together. I was a terrible boss. A really bad boss. 6am, midnight…. They put this shit together for you guys. And now I will talk about my favorite subject, myself. I’ve done over 16,000 shows over 27 years.

He ended his speech, and the festival by stating:

“This is the hardest thing I’ve ever done. It wasn’t for me, it was for all of us…. For our mental health…. We needed this, we really needed this. What I want you to do is tell your grandkids that you went to the first festival back. You saved the rave. We fuckin did it.”

Looking back at Ubbi Dubbi, I can’t help but feel a sense of happiness at the thought of being able to tell my grandkids that I went to the first festival back and that I helped to save the rave. This is not hyperbole. With that being said, I look forward to seeing the rest of the rave scene follow suit. With Sunset Music Festival set to take place in Tampa, and Hard Summer in , I can’t help but think that things are beginning to come back to normal.

After seeing an event following many being canceled/ postponed I honestly think that Ubbi Dubbi was the light at the end of the tunnel that we were all searching for. Only time will tell if takes place this October after all, but I for one, wholeheartedly expect it to. As recently said:

“I don’t believe that music, dancing, the freedom of expression will be suppressed for much longer. They can’t—that’s against human nature.”