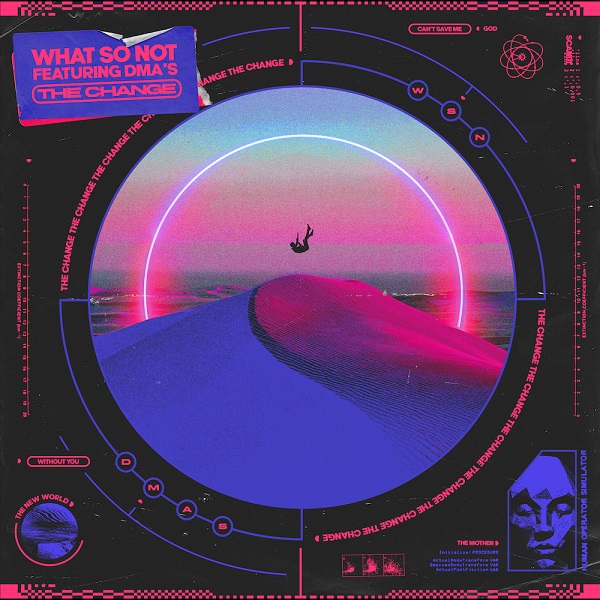 What So Not is finally back with an insane track featuring DMA’s titled ‘The Change‘. He and Jordan Chappell have been working on this track for numerous years and we’re finally getting it. The crossover is just an amalgamation of beautiful soundscapes, ranging from kinetic to breakbeat. This is his first single back since 2019 when he released a remix of ‘JU$T‘ by Run The Jewels, Pharrell Williams, and Zack de la Rocha.

It’s beautiful, dark, and brooding from the start. The synthetic instrumentals give off a retro wave vibe but build up your anticipation for the chorus. That sexy breakbeat bassline just hits you right in the chest. The percussion pattern pushes you closer to the edge while you listen to the vocals sing. Like a rockstar, they belt out the lyrics that empower you to your fullest. I love the way it sounds, it’s different and so unique. Their cover art is filled with neon colors and it’s captivating.

What’s more, is the trippy official music video that accompanies the track. It’s a track that perfectly captivates the Cyberpunk vibes, living in a new dimension, and transcending straight-up fire. Robots run the streets, skylines lit up in neon, life as robots, and different areas like the Outerlands come to life. It’s a spectacular music video and imbues you to dance. There is so much going on in it, you’ll have to watch it for yourself. Let’s go, Chapter 5!

Teaming up with the rock group trio showcases his talent as a producer that genre bends with maximum effort. We see their collaborative release on Counter Records. To say that his fans have missed him is an understatement. We’ve been watching and waiting patiently for new music and now we can rejoice.

In the words of What So Not — “The Future is Here!”

What So Not featuring DMA’s – The Change | Buy/Stream